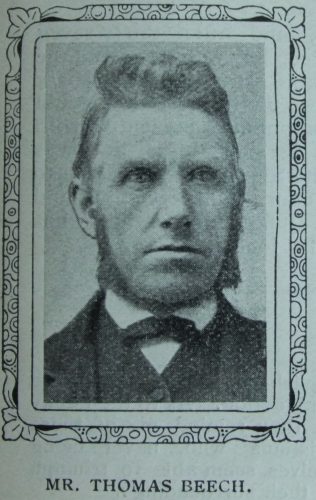 The name of Thomas Beech has appeared on the Tunstall Circuit plan for more than fifty years. The type of preacher of which he is a striking representative is fast disappearing. “The old order changeth,” and Mr. beech finds himself somewhat out of harmony with the new condition of things. “Don’t give me many appointments, mester,” said he to the writer. “I canner preach nau; I’m like an owd hoss plungin among a lot o’ kouts.” Quaint, but the revelation is melancholy. Perhaps the Local preachers’ Training Association will save the aged men of the future from experiences of this kind. Mr. Beech is a very generous man; he keeps a brown bag, on one side of which he has written “For Christ’s sake.” In this bag he deposits what he calls the Lord’s money and from it many pounds have been drawn to help God’s work and to assist the needy. If, however, a doubtful case is suggested, his purse and not the bag is taxed to contribute.

As a preacher he largely depends on the inspiration of the moment, though preparation is not neglected. In his earlier years he was a veritable Boanerges – powerful physique, good lungs, excellent memory, racy style and the gift of ready utterance. No wonder his services were in great demand. He is the leader of our Red Street Society, which he nurses with much devotion. He has recently secured as a gift to the Connexion property worth £500, which formerly belonged to the Unitarians.

Thomas was baptised on 20 February 1831 at Wolstanton, Staffordshire. His parents were James and Mary.

Thomas was converted at Dalehall under the ministry of the late Rev. Robert Bowen, and was one of the founders of the Smallthorn Society in the Burslem Circuit. In 1900 the members of the Tunstall Society presented him with an illuminated address, bearing testimony to his long and faithful services in every movement which had for its object the betterment of his fellows.

Note: Boanerges was the name given by Jesus to the brothers, James and John (Mark 3, 16-17)