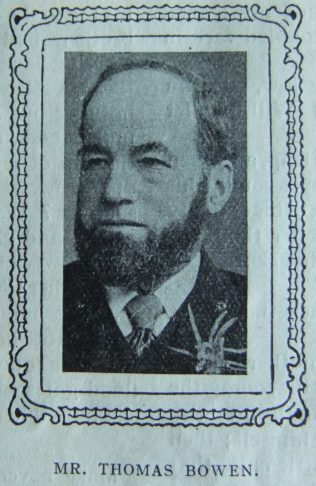 OUR churches in Bradford are not particularly wealthy in Class leaders, but among the few we have, Mr. Thomas Bowen takes a foremost place. Like many of the best workers in our town churches, he hails from the country, being a native of Herefordshire, though he was converted in Bradford just after his arrival in the city a little over forty years ago. This took place in the old West End preaching room in Rebecca Street, and having become a member of this society, he was one of those transferred to the new building in Woodlands Street, 1875. Thus he – along with Mr. John Hayhurst, another devoted official worthy of recognition – has been with the cause here from the beginning. Soon after this transfer, Mr. Bowen started a new class, and through all the intervening years has continued to lead it. No leader was ever more devoted to the interests of his class than he, and though sometimes the indifference of some members to this means of grace perplexes him, yet his enthusiasm for the class meeting is just as great to-day as when he began thirty-six years ago.

But Mr. Bowen is also engaged in other fields of toil. He is a diligent Sunday school worker, and for thirty-four years taught the same class. At the present time he is superintendent, and every Sunday morning and afternoon, is to be found in his place. As Trustee, Chapel steward, member of District Committee, Free Church Council and P.M. Council, he also faithfully serves his church. He is not a local preacher, but calls himself a “stop-gap,” yet the people sometimes prefer the “stop-gap” to the preacher! As a visitor of the sick and dying, those on the fringe of the churches often prefer him to the parish priest.

Thomas worked as a gardener.

Thomas married Maria Harris (1846-1918) on 14 April 1870 at All Saints, Wellington, Shropshire. Census returns identify one of five children. They also brought up a nephew, Walter Hurp, (b abt 1885) who also became a gardener.