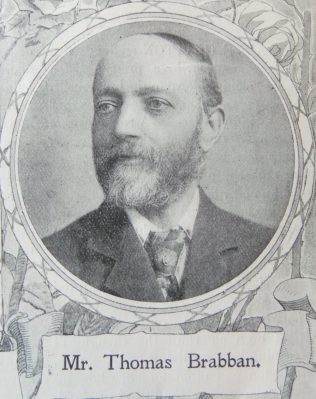 Burnopfield Circuit is fortunate in having for its Chancellor Mr. Thomas Brabban, of Marley Hill. Mr. Brabban has been associated with circuit finance for upwards of thirty years – twenty as steward, and ten as financial secretary. “The Steward” as he is familiarly called, is a man of many gifts, and has a splendid record. Though our oldest local preacher he has never neglected an appointment. As secretary to the Trust our fine property at Marley Hill was built largely under his guidance. Several times he has been to District Meeting and Conference. On the School Board, as a Guardian, and in other ways he has served the public. But he lives for his church. His time and strength and substance are all and always at her disposal. He is ably seconded by his capable and devoted wife, who, like himself, is a class leader, while in their home – a preachers’ salon – she dispenses a generous hospitality.

Thomas was born in 1845 at Bishop Auckland, Co. Durham, to parents James and Mary. James was a coal miner.

Thomas married Deborah Hannah Harrison (1852-1922) in the summer of 1871 in the Gateshead Registration District. Census returns identify one child.