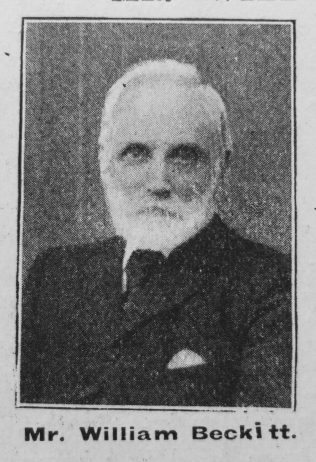 Transcription of Obituary in the Primitive Methodist Magazine by W.W.

The Victoria Bar Church, York Second Circuit, has sustained a severe loss in the sudden decease of Mr. W. Beckitt, one of its oldest, and most highly esteemed members and officials. This sad event occurred with startling suddenness on the afternoon of Tuesday, June 2nd, 1903. Though Mr. Beckitt had been somewhat unwell for several days, yet no one apprehended any serious issue. He attended Divine Service as usual on Sunday evening, May 31st. On the Tuesday following, while getting ready to leave home for a few days’ change at the home of his friends, Rev. A.P. and Mrs. Osborne, of  Saltburn, he had a sudden heart seizure, and in a few minutes his happy spirit passed within the veil. God kissed him and he fell asleep.  Notwithstanding the unexpectedness of his removal, it was beautifully appropriate, and in harmony with his own desires and feelings, for he had often expressed the wish that he might be spared a lingering illness.

Mr. Beckitt seems to have been connected with Primitive Methodism for nearly the whole of his lifetime. In the morning of life he consecrated his young manhood to the service of God. More than 50 years ago he was a member at the old chapel in Grape Lane, and afterwards at the Little Stonegate Chapel. When the cause was begun in Nunney Lane, he transferred his membership to it and with the exception of a few years spent in Liverpool, he continued to be a member of the Church at Victoria Bar until his death. During his long membership he filled some of the most important offices in the Church and School. At the time of his decease he was Sunday School Teacher, Chapel Steward, Society Steward, and Class Leader. It is no exaggeration to say that in all these important offices he acquitted himself well. He was seldom absent from the post of duty, and he was carefully attentive to all the details of his work. A man of sterling integrity of character, methodical and orderly in his habits, and scrupulously careful in all his financial transactions.

His religion was not of the demonstrative kind, but there was a natural dignity, a gentle grace, and a quiet fervour that impressed one with its genuineness. His modest, unassuming demeanour, his gentle, and peaceable disposition, his wise and sagacious counsel, greatly endeared him to all hearts. His influence in our Church courts, and in our meetings generally, was always on the side of peace. He came in and out amongst us as a gracious influence, and though he has passed away from us yet the sweetness of his life will linger long.

He was a devout and spiritually-minded man, strong in faith and love, and in power of the highest kind – Divine power. A choice and Christ-like spirit, one of nature’s true nobility, a fine, Christian gentleman.

The interment took place at York cemetery on Friday afternoon, June 5th, after an impressive service in Victoria Bar Church. A Memorial Service was also conducted in the Church on Sunday evening, June 7th, by the Rev. W. Wheeler. Many of the old friends and fellow-workers of Mr. Beckitt were present, and to some at least it seemed as though he himself was not far off.

William was baptised on 18 March 1832 at Sherburn (nr Leeds), Yorkshire. His parents were George, a farmer, and Hannah.

Note: Some records have the surname as Beckett.