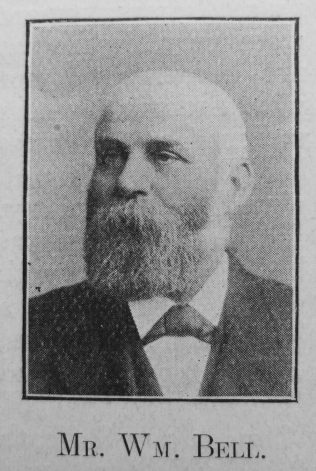 Transcription of Obituary in the Primitive Methodist Magazine by G. Shapcott

On October 1st, 1903, Bro. Wm. Bell passed to his eternal rest. His departure left a great gap, and was a felt loss to our circuit and the Connexion.

He was born in the North of England at Brass Side, a colliery village in the County of Durham.

His early advantages for elementary education and culture were exceedingly meagre. What instruction he received was largely obtained in the Sunday School. What advantages there were he readily seized, and by industrious efforts pushed ahead so as to fit himself for the great task of life.

The Sunday School was not only the place of his early education; but was the circle in which a sense of his spiritual needs was brought home to him and where spiritual inquiry resulting in Christian discipleship and apostleship was awakened and fostered.

He attended the class meetings and other means of grace and lived in the warm, fervid atmosphere common to the Primitive Methodism of the north in those days.

Soon after his conversion, in the white heat and glow of his first love at the age of seventeen, he was placed upon the local preachers’ plan as an exhorter, and from that day to the day of his ascension, a period of 47 years, he served the Connexion with conspicuous ability and devotion. He was constitutionally a bright soul, and buoyant with the best kind of optimism, the atmosphere he created was of the purest and best.

He was alive to much of the new thought of the times; but he lived and preached the need of salvation by faith in the death and resurrection of Christ. His calling compelled him to move from place to place, after short periods of residence, during the last 27 years. From Durham City he removed to Blyth, and from Blyth to Stratford in East London.

Coming to London when Mr. Bell came, was always a test of a man’s loyalty to the Connexion. Stratford, in those days, was a very small and feeble society, and he might have been tempted away from the Church of his early choice, but our beloved friend was not one of those to so soon forget the deep debt of obligation to the church which had helped him to improve his mind and led him to the knowledge of the New Creation.

For years he was identified with our Stratford Society, and worked hard for the enlargement and establishment of the church there.

From Stratford he removed to Harlesden, in the Kilburn circuit, and at once joined the church at College Park and threw himself heartily into all the departments of our church life, and worked with an ardour which never abated until through failing health he had to halt and rest.

In the long and painful affliction which preceded his decease, he manifested a beautiful resignation to the Father’s will, which is only possible when and where the mind is stayed upon the assurance of God’s wisdom and love, and where both mind and heart are perfectly free from apprehensions of the future. For years he has known that passing over the horizon line did not mean going out of life; but rather to those linked to the risen Christ, a passing up into an unfettered and ampler life. I can testify that the Masters saying had taken full and dominant possession of his soul, “Verily, verily I say unto you, if a man keep My word he shall never see death.”

Only a few days before he passed to his rest he was visited by the Rev. J.F. Porter, his friend from boyhood, and his parting words to him were: “I am in the Father’s hand, John, He will do what is best for us.” In this restful and victorious frame of mind, this patient sufferer of the Father’s pleasure passed from the suffering of life to the rest of his heavenly inheritance.

Mr. Wm. Bell was a good man, a beautiful exemplification of faith, hope, and charity, and with him the greatest of these was charity. May his family and friends know and enjoy the Father’s love and help as he knew and enjoyed them, and triumph in death as we believe he triumphed.

I have not been able to identify William’s parents. He was born abt1845.

William married Mary Dobson (1849-1893) in the spring of 1869 in the Newcastle upon Tyne Registration District. Census returns identify seven children.

William married Ann Eliza Baker (b abt1857) in the spring of 1895 at Aberystwyth, Cardiganshire. Census returns identify two children.