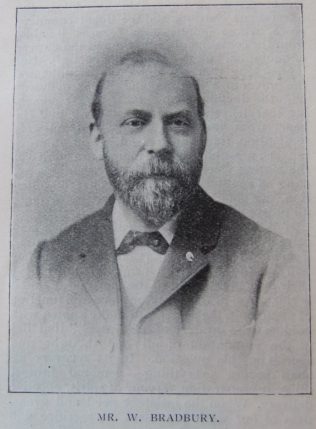 One is glad that the CHRISTIAN MESSENGER has provided a Gallery for the Local Preacher, but I am afraid it will never be filled, for the roll of worthy men is endless.

Many good and wise men have already appeared in your pages, but none has been more worthy of an honoured place than Mr. W. Bradbury of Buxton.

Born at Leicester on the 7th October, 1860, he is now in the heyday of his power as a man and a preacher. At the time of his birth his parents were members of our Curson Street Church, his father being also a trustee of that property.

When the subject of our sketch was eight years of age, the family removed to Cambridge, but remained there only a few months ultimately settling at Kettering.

In those days there was no Primitive Methodist cause in the town of Kettering, so that Mr. and Mrs. Bradbury, with their children, attended the famous Toller Chapel, in Gold Street, where the Rev. Thomas Toller, Sen., ministered for so long. He was succeeded by his son, the Rev. Thomas Toller, and the two pastorates covered a period of more then a hundred years.

It was as a scholar in the Toller Sunday school that our friend received a great deal of his religious training, the influence of which is strongly felt in his life today. As a scholar he went through all the classes. He remembers and speaks with especial esteem and love of Mr. A. Barratt, Mr. R. C. Wrigley, and last but not least of Mr. William Toller, a brother of the pastor of his day, all teachers in the Sunday school.

He remained a scholar of the above school until the nineteenth year of his age, when he removed to Buxton. Here, during the first years of his residence, he lived with and worked for Mr. and Mrs. Nadin, an uncle and aunt, than whom Buxton Primitive Methodism has never had more loyal and helpful members. Mr. Nadin is yet, as he has been for over twenty years, the society steward of our Buxton Church. The young nephew was, of course, taken to the Primitive Methodist Chapel.

Mr. Bradbury had from childhood been full of good desires, and had never contracted any bad habits. He came into the world with what some would describe as a good stock of natural religion. Yet it was not until he came to Buxton that he took any definite stand for Christ.

He soon became a teacher in the Sunday school, and has taught every class, continuing to serve in this capacity until he was made assistant-superintendent, a position he resigned in order to form a Young People’s Institute. As head teacher of the Institute he gathered together from the school and elsewhere a large class of young men and women, which he left in other hands, when, for the sake of Mrs. Bradbury, who was then suffering from a serious physical disease, he removed to Colwyn Bay, where he resided for about eighteen months, when he was at home, for it is said that during this time he was as often at Buxton as at Colwyn Bay. He never ceased to be a member of the Buxton Circuit, and during the whole of the eighteen months travelled to and fro in order to take his appointments. Great was the sorrow felt by the Buxton Primitive Methodists when Mr. Bradbury severed himself from active work in its Sunday school. Since his return he has been more or less actively associated with the young life of our church, and at the annual Teacher’s Meeting last December he was elected by the unanimous vote of the teachers to the position of co-superintendent, With Mr. G. Burton as a colleague.

Mr. Bradbury has not given the whole of his time and talent to Sunday school work. Twenty years ago all suitable men for the plan were requisitioned, and Mr. Bradbury was among them. There is no more popular preacher in our Circuit, and in preaching power he is second to none. As an evidence of this, I may add that he has for several years conducted special Gospel Missions in his own Circuit by request of the different societies among whom he has laboured, and even yet, especially in the villages, if Mr. Bradbury’s services can be secured, no other missioner will be sought after.

As a preacher he is original, poetical, and evangelical. He has a mind that is a fine blend of the mystical and the practical. His sermons give evidence of careful preparation, considerable acquaintance with modern religious thought, a wide mental outlook, and an enlarged spiritual nature.

He is often invited by other Circuits as a special preacher for anniversaries of every character, and for missions, both for the deepening of the spiritual life and for the reclamation of the alienated and unsaved masses.

He cannot respond to every appeal. and all outside work accepted is taken with a due regard to the claims of his own Circuit. He is by no means always out, for he takes more work in his own Circuit than any other local preacher on our plan.

Mr. Bradbury is a loyal Primitive Methodist. Twenty years ago he entered business for himself as a grocer and provision dealer, and, by dint of hard and continuous work, was able, after fifteen years’ toil, to partially retire on a moderate competency. He withdrew, as he says, because he thought that the making of money was getting an undue hold of him, and began to feel that there were higher aims. For years he had longed to give himself more completely to religious work, and after his retirement he gave himself more fully to the work of the Church. Unwilling to go before the Lord, he waited the call to the larger sphere. About two years ago he received what at first he took to be the call, a unanimous invitation to become the pastor of a Congregational church in one of the larger villages of Derbyshire. It was then that the eyes of his brethren were opened, and an opportunity was found him to serve the Church of his choice, in the Circuit where he had laboured so long. The position of honorary evangelist being offered him, he took it, and has held it ever since. At present time he has charge of a new mission, that was opened about eighteen months ago, in the midst of a rising population, at Fairfield, Buxton. When he took charge of the mission church there were only twelve members, with a debt on the building of £65. To-day there are thirty-four members, and no debt at all – a tribute to his enterprise and work.

Not only has he the pastoral oversight of the church at Fairfield, as well as being its secretary, treasurer, and Sunday school superintendent, he is also the actual, if not through courtesy to the minister, the nominal president of a large and vigorous Christian Endeavour Society connected with our church at Buxton. It is here that Mr. Bradbury excels. He can do what he likes with the young people, He is a most enthusiastic Endeavourer. All the Endeavour Societies  in the Circuit may be called his spiritual children.

He has just commenced a junior in connection with the Buxton Endeavour Society, and is contemplating one or two other schemes or the benefit of the young.

Among the Free Churches of Buxton and the district he is held in high esteem. For two years he has been secretary to the Free Church Council, and also, since its inception, secretary to the Passive Resistance League. He is an ardent Nonconformist, a pronounced passive resister, an enthusiastic temperance worker and a sound Liberal.

As a man Mr. Bradbury is modest, resourceful, cautious, and capable of great but quiet enthusiasm. He does not very soon make a friend, nor is he a man who wears his heart upon his sleeve, but the one whom he can trust he “grapples to his heart with hooks of steel,” and to him he confides his innermost secrets. There never was a truer friend or a kinder foe, if, indeed, he is capable of playing the role of the latter, for he always finds the best in everybody, and magnifies the weakness of none.

He has been singularly blessed in taking to himself a wife who has been a helpmeet indeed, a lady in fullest sympathy with himself in temporal and spiritual concerns, a splendid complement to his lofty song,

William was born to parents Ralph and Ruth. Ralph was an engine fitter.