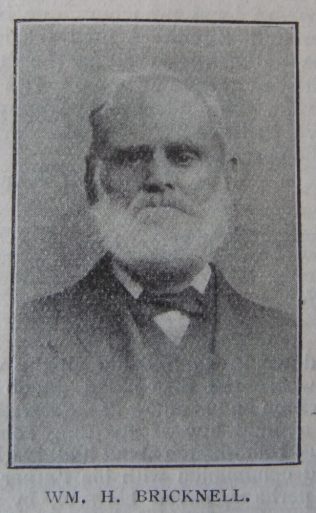 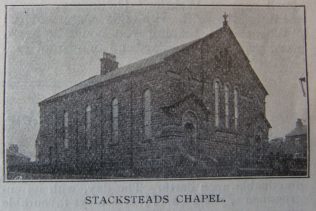 William Henry Bricknell, or “My No. 2,” as his minister likes to style him, owing to the fact that his name stands next on the plan to the minister’s, is a man of whom our Church has just cause to be proud. The Church which he has served for forty-five years has done much through the grace of God, for him, and he has done much for the Church. He will tell you that, under God, he owes everything he is and has to the Primitive Methodist Church. This our story will show.

He was born near to Banbury, August 14th, 1840. When but six months old he had the serious misfortune to lose his mother. That the loss was indeed serious is evident from the rough experiences which, as a child and youth, he passed through. Not long after the mother’s death the father removed with his family to Coventry in search of work. Here the subject of our sketch remained up to being twenty years of age, when he came into the far-famed Rossendale Valley, settling down at Stacksteads. It was the need for work which brought him up here. At this early age he was a married man and a father. Of education he had received absolutely none. At twenty years of age he knew nothing more than his letters. His conversion was brought about in a very roundabout way apparently. God has more than one way of accomplishing His will. His methods are manifold.

About twelve months after being in Lancashire his wife’s sister came up from Coventry in search of employment, and made her home with her brother-in-law. Her coming was providential. She was an earnest Christian and devoted Primitive Methodist. And when Sunday came she asked her brother-in-law to take her to the Primitive Methodist chapel. He did not over relish the task. However, he took her. It was his introduction to Primitive Methodism, and the members of our Stacksteads church at that time were a lively crew. They could shout and dance and sing. Our friend thought they were a “soft lot.” Afterwards he could shout with the best of them. In those days our people were great on cottage prayer meetings, and one was arranged to be held at young Bricknell’s home. The meeting struck deep to his heart. In Scriptural language he was “pricked” to the heart, an decision was not far off. In the winter of 1861 Rev J. Aspinall conducted a series of evangelistic services, in which, with many other young people, our friend found salvation and surrendered his life to Christ. His spiritual awakening, as in many another instance, meant mental awakening also. He then with shame, became aware of his lack of education. He did not spend time in vain regrets, however. He set to work to improve himself. Many, many hours that should have been spent in sleep were spent in mastering the simplest words. One thing to his great advantage is that he is blest with wonderful pertinacity and continuity, otherwise he would have succumbed to ignorance.

It was a matter of great joy to him that, in connection with the Sunday school, there was a weekly mutual improvement class. It was in this class that he first attempted to speak, and where his success in speaking led to his being recommended for the plan. Before becoming a preacher his services were enlisted for the Sunday school, where he was put to teach one of the lowest classes. He worked so consistently and acceptably that he passed up from class to class, ultimately becoming the teacher of the young men’s class, which position he held for sixteen years, vacating it last year owing to enfeebled health.

It was about a year after his conversion, at the age of twenty-two, that he commenced his career as a preacher. The brother he accompanied was Mr. William Brooks, a man of splendid character and devotion, whose sons, though members of our sister Church, living where Primitive Methodism is not, are proving themselves true to the faith of their father, and are ever ready to help the Church of their father. After coming on to full plan, a visit was paid to the home of the budding preacher by the minister of the Bacup branch – Rev. J. Aspinall – who enquired of our young friend what books he had. In his simplicity our friend replied: “I have my Bible and my hymnbook: do I require any more?” The answer we can guess. That, however, was not the end. The next time the minister came he brought with him, as a present, a well-bound, small copy of Webster’s Dictionary, supplementing the gift with this sage advice: “Whenever in reading you come across a word you cannot understand or cannot properly pronounce, turn to this dictionary.” The book is highly prized to this day, and is in excellent condition. From then till now our brother has been declaring the Gospel of the grace of God. Preaching has been his delight. He was born to the work, and God has blessed him therein. At one time he was on no less than three plans – Bacup, his own Circuit, Rochdale, and Helmshore, in addition to which Wesleyan, Baptist, and Congregational churches have sought his services. He is naturally gifted with a good flow of language, is earnest, evangelistic, pointed. And many are the fruits of his labour. No brother is held in more high esteem among the officials of his Circuit. For forty-four years he has wrought and wrought well. His one regret at this time is that enfeebled health necessitates rest from preaching. He is in no hurry to lay down his tools. He would rather far continue to use them.

What about his home influence? Of four sons two are local preachers, one is church treasurer and Sunday school teacher. His piety has not been reserved for the pulpit. It has been shed abroad at home. His children honour him. That he may have many years of service yet granted to him is the devout wish of all who serve with him.

William worked in the weaving industry. By the time of the 1891 census he had become an insurance agent.

William married Elizabeth Ann Pilling (abt1840-1924) in late 1888 in the Rochdale Registration District.

William died in the spring of 1914 at Stackstead, Bacup, Lancashire.