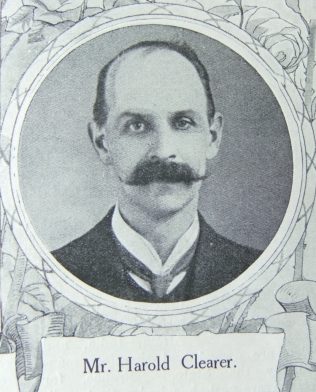 Mr. Harold Clearer, the Chancellor of Bath 2nd Circuit, has held that position for upwards of seventeen years. That in itself speaks well for his devotion to the interests of the Church. He has been connected with Claremont Society all his life, Having passed through its Sunday School, and at sometime or other has held practically every official position in connection with the Society. A keen business man, he brings to the work of the Church those qualities that are indispensible to success whether in commercial life or in matters of circuit finance. He is heartily in sympathy with every part of the spiritual work of the Church, and is always ready to do his utmost to further the interests of God’s Kingdom and Primitive Methodism. He has represented the Circuit in District meetings, and has a seat on the District Committee.

Harold was most probably Abraham Harold Cleaver, born in 1869 at Walcot, Bath, Somerset, to parents William and Ann. William was a postman.

Harold developed a business as a bookseller.