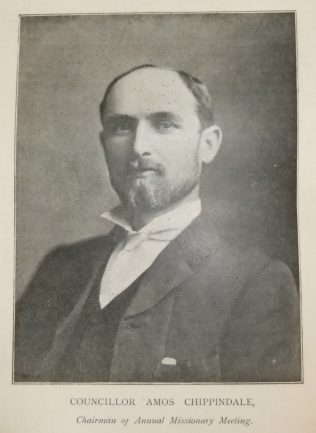 Amos was born in 1859 at Nidd, Yorkshire, to parents William Chippindale and Grace Davey. William was a timber merchant. William is reported to be a great man of ideas but had no sense of application.

Amos was blessed with a fairly good physique, a disposition to work, and a religious beginning. He went though Sunday School as a scholar, teacher and finally superintendent. Amos was converted aged 12.

Amos was a master builder and developed a substantial business.

He became a town councillor, was a Guardian of the Poor, Governor of the Bath and Cottage Hospitals and of the Town Mission.

Amos was Vice Chair of the Harrogate School Board. He was president of the local Liberal Club and was Projector and Chairman of the Swimming Baths.

Amos was a local preacher. He served as District Mission Treasurer and was a Connexional Auditor.

The Harrogate Advertiser (2 March 1901) records that Amos bought the Edinburgh Literary Institute, South Clerk St, Harrogate, for the sum of £10,500 for the Primitive Methodist Missionary Society.