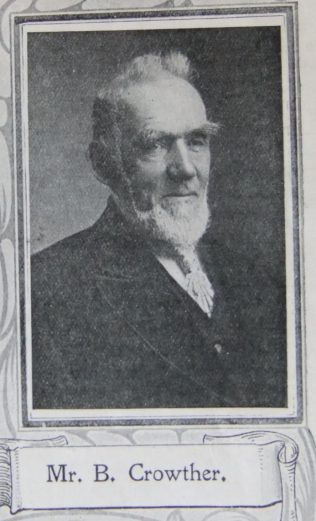 The Steward of West Bromwich First Circuit is seventy five years of age. A grand old man with the open-mindedness of youth. Readily he assimilates new ideas and welcomes schemes for to-morrow as eagerly as references to the triumphs of yesterday. All circuit projects bear the impress of his hand, and forward movements he heartily supports. Our circuit owes much to his generosity, and is indebted to Mr Crowther for the unsparing pains he has taken in its development. For many years he has sacredly guarded its treasures, and much of its spiritual vigour is the product of his untiring devotion. The circuit is always ready to give its steward a position of distinction in all its functions, and Queen Street Church recently expressed its high esteem by presenting to Mr. Crowther a beautifully illuminated address. Fortune’s sun has brightly shone upon our friend, and heaven’s golden riches are not withheld.

Benjamin was born abt 1833 in West Bromwich, Staffordshire, to (probable) parents John and Mary. John worked in the boiler-plate industry.

The occupations for Benjamin listed in the census returns are as follows.