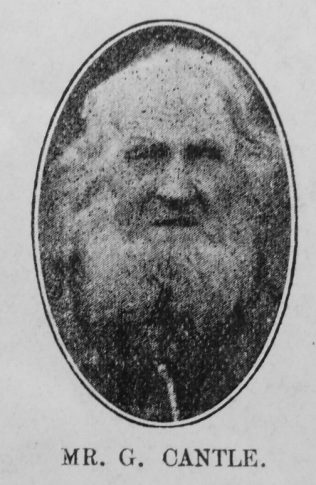 Transcription of Obituary published in the Primitive Methodist Magazine by J.G.

George Cantle, class leader, passed away at Pontnewydd, January, 1909, at the ripe age of ninety years.

He was for sixty years a Primitive Methodist, first at Kingswood, Bristol, then at Upper Cwmbran, and finally at Pontnewydd, where he became class leader, which position he held until his death, a period of fifty years. He was one of the founders of this church, watched over it with great care, and when reverses and losses came he remained faithful.

He was a man of exemplary piety. At God’s house in all weathers, his presence was an inspiration. He was a man of prayer and of faith. His reliance on the verities gave tone and strength to his life. He knew his Bible, spoke of it as his “legacy,” prized its promises, regarding it with a reverence almost pathetic. He never doubted its inspiration or questioned its authority. There was a distinctiveness about his character reminiscent of the fathers of our Church.

To the anxieties of business there came the cares of a large family. To maintain these he worked both early and late. The domestic struggle was severe, but his home life was exemplary. He ruled by love and not by fear. He watched daily over the spiritual interests of his children and now that he is gone his memory is revered. He was loved too by his class. It was touching to note the little attentions shown to him both in the the sanctuary and in the street.

His fellow-townsmen held him in high esteem, inquired diligently after his condition while ill, and greatly regretted his death.

His last illness was short. Ministers and friends visited him and found him singularly cheerful and calmly resigned. He viewed the end without fear, and joyfully anticipated his release. This came quietly and without struggle. The funeral was a large one. Ministers of all the churches were present and took part in the service. The church was full of sympathisers with the bereaved. Devout men carried him to his burial. His remains rest in the Pontnewydd Churchyard, Pontypool Circuit. His memory is blessed.

George worked as a shoemaker.

He married Ann Fussell (1817-1893). I have not been able to identify the marriage record online. Census returns identify ten children.