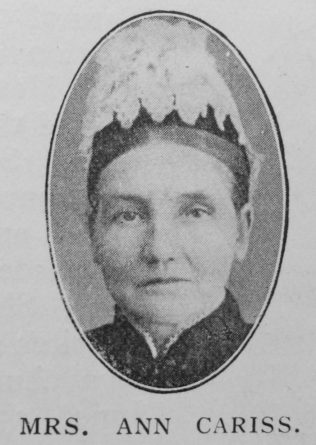 Transcription of obituary published in the Primitive Methodist Magazine by A.J.B.

The ancestors of Mrs. Cariss were among the first members of our church in Whitby. Mrs. Cariss was brought to God in early life, and became a useful member and worker of Church Street Church. She in due course became the wife of Rev. T.S. Cariss, one of our esteemed ministers, who passed away, after a brief ministry of eleven years, while travelling at Hereford.

Since her husband’s death the widow had resided in Whitby, and was a strenuous worker, both in her own home and in the church she loved so well, especially in connection with the annual bazaar. Her Christian experience was real and deep, and she was a regular attendant at the means of grace.

Her illness was long and painful, but borne with Christian fortitude and resignation. She died October 9th, at the age of 71 years. The Wednesday following the interment took place in Whitby Cemetery, Revs. A.J. Bull and W. Robson taking part in the service. The departed was one of the oldest members in Whitby Circuit.

After Thomas died, Ann worked as a lodging house keeper, living with her mother at Whitby.