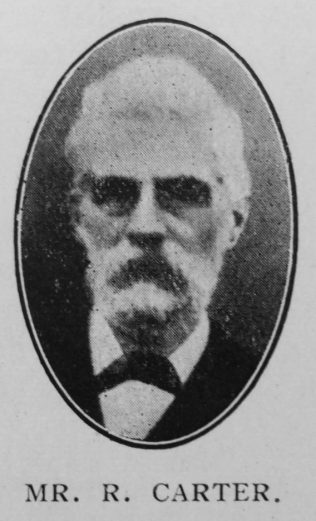 Transcription of obituary published in the Primitive Methodist Magazine by T.C.

By the death of Mr. Robert Carter, Mainsforth Terrace Chapel, Sunderland IV. has sustained a very severe loss. He was sixty-one years of age and was connected with the Church from his boyhood. He was a class leader, trustee, and had been church treasurer for forty years. Methodical in his habits, his books were always well kept. A Sunday School teacher, and for many years superintendent of the school, he loved his work among the children.

The young local preachers and young men will miss his welcome words of advice and encouragement. Never absent from the sanctuary when it was possible for him to attend, during the last two or three months when his affliction would not permit him to attend the church he still took an anxious interest in its affairs. The ministers on the Circuit always found in him a loyal supporter and faithful friend. Of a kindly disposition, he was held in very high esteem by a large host of friends.

A member of the Sunderland and Newcastle District Committee, he had represented his Circuit at District Meeting and Conference. A keen temperance worker, he was connected with the local Band of Hope and Sunday School Unions. The interment took place on May 31st at the Sunderland Cemetery.