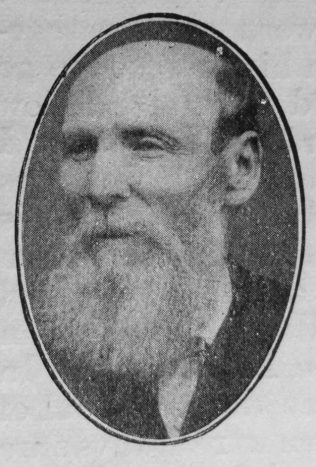 John Case was born at Havre-des-Pas, Jersey, on May 4th, 1817. The revolutionary forces which had made themselves violently felt in the early years of the century developed certain military elements in his nature which showed themselves very early and remained strong in him to the end. He readily took his place in the island militia and served his full legal term. During my five years in Jersey he told me many incidents of his early days which throw a light upon a childhood which must have been extremely painful. The mixed nationality of the place found characteristic expression in his whole after life. The blending of French keenness and English persistency manifested themselves in his decision to make a position for himself. It was his good fortune to find employment with a dyer. He resolved to become a master dyer himself. He quickly made friends with men older than himself, plied them with questions, and gained such knowledge of the trade that he felt competent to commence business for himself. As generally happens, when honour and industry are blended in a business he succeeded in winning the public confidence, and he took a recognised position as a master of the craft.

Religiously his early years were drowned in a multiplicity of trifles, and his soul felt no repose. Those were days devoted to the free play of fancy and rather wild pleasures. Being of a very social nature he revelled in the society of kindred spirits. It was during the year 1847 that he came under the influence of the Rev. T. Knox, and at once he entered the fellowship of our church, retaining an unbroken membership for sixty years. He carried the enthusiasm and persistency of his business life into his labours in the church; and filled all the offices for which he was deemed capable. His son-in-law, Mr. John Bailey, writes, “He was a member of Aquila Road for sixty years, and in all that long time I think his one aim was to do all the good he could, and to give even beyond his means.” He experienced no fear in the discharge of what he believed to be his duty. During the cholera visitation of St. Heliers he visited most of the victims, and prayed with all, pointing them to Christ. It was made very clear that he was devotedly attached to his church, and was jealous for its good name. He would never permit a word of disparagement against it spoken in his presence to go unrebuked; but be would generally follow the rebuke with the words, “You know I love my church as I love my life.” I always found a hearty response when I sought his help for those in need, and nothing gave him greater joy than to hear of the progress of the kingdom of Christ. How he revelled in stories of early Primitive Methodism! In the domestic circle he was the very soul of innocent fun. The children were always sure of a good time at the school treats if Father Case was present. He was devotedly attached to his children, and considered no sacrifice he made for them too great. With eagerness he followed the successful labours of his daughter and her husband, the Rev. R.R. and Mrs. Connell, and more than once he took long journeys to visit his youngest daughter, whose husband filled an important Government office at Santander, in Spain.

The brief story of his last days is the record of the breaking up of a once strong man. The cause of his death was “senile decay.” In his ninetieth year, on March 1st, 1907, the old saint was called to the re-union with his good wife—a true mother in Israel—who had pre-deceased him ten years. He was buried in the Almorah Cemetery by the Rev. D.T. Maylott, who afterwards emphasised the lessons of his life to a sympathetic congregation in Aquila Road Church. Blessed are the dead that die in the Lord—yea, blessed are the faithful who have lived in the Lord – they do rest from their labours and their works follow them, and their children rise up and call them blessed.

John was born on 4 May 1817 at Havre-des-Pas, Jersey, to parents John case and Catherine Warren.

John spent his working life as a dyer.