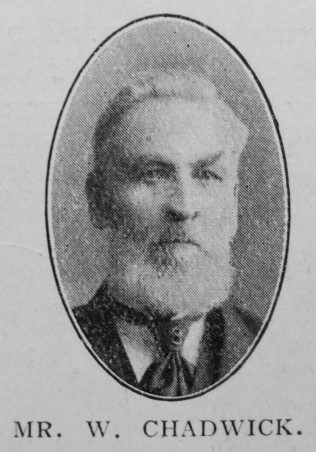 Transcription of obituary published in the Primitive Methodist Magazine by H. Semper

London Road Church, Kings Lynn, mourns the loss of William Chadwick, who for many years was Society steward and trustee. He was born at Darton, Yorkshire, in the year 1842. Removing to Lincoln, he married her who for many years was assiduous in her care of him, and whose devotion undoubtedly prolonged his life.

For upwards of forty years he was an active Church worker, and though unable during the past six years to take part as he had been accustomed, he never lost his interest or failed in his devotion to the Church he loved. He was quiet and unostentatious, sincere and reliable, honourable and upright. His widow, three daughters and a son sorrow that he is no longer with them, but rejoice that his sufferings are over, and that he has entered upon the rest remaining for the people of God.

He fell on sleep on the eve of the holding of the District Meeting at Lynn, May 3rd, 1912. On the following Wednesday, Rev. H. Semper conducted a service in the church, after which the body was conveyed to Lincoln, Rev. John Hall officiating in the cemetery.

William was born in 1841 at Darton, Yorkshire, to parents William Chadwick, a well sinker (1861), and Mary Dyson. He was baptised on 5 October 1841 at All Saints, Darton.

He married Letitia Wakefield Chaloner (1840-1921) in the summer of 1865 at Lincoln, Lincolnshire. Census returns identify six of eight children.