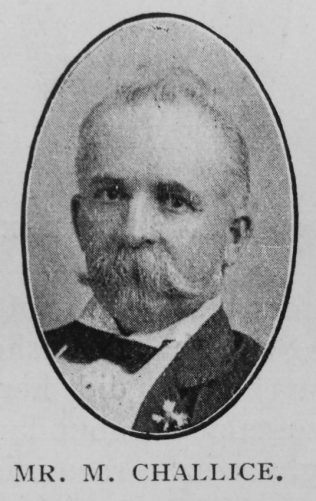 Transcription of obituary published in the Primitive Methodist Magazine by A.E.G.

Mr. Matthew Challice, for long a foremost official of the Wickhambrook and Newmarket Circuit, died on July 30th, 1911. He was born February 20th, 1842, and in the early days, when our church in Newmarket was meeting in an obscure room, he experienced a soul awakening, and at once attached himself to the small community representing Primitive Methodism in the town. For fifty-three years thereafter he continued to labour in the Master’s work.

During the ministry of the Rev. R.S. Blair, when the Wickhambrook Circuit underwent considerable development, our friend—then Circuit Steward—heartily co-operated with his minister in the extension movement. It was during this period that several village chapels were built within the area of the Circuit. Mr. Challice willingly expended money and energy in behalf of the good work.

A sincere and earnest Christian, he was at home in a class meeting, and displayed a remarkable gift in prayer. His religion was manifest in his home relationships, and has left its impress upon the members of his family, all of whom are in fellowship with the Church of Christ. One son, Rev.. F.C. Challice is now the Superintendent of our Norwich First Circuit. Mr. Challice was twice married, and owed much during his weary days of suffering to the loving and tender ministrations of her who mourns his loss. We pray that to the widow and family Divine consolation may be given.

Matthew was born on 20 February 1842 at Newmarket, Cambridgeshire, to parents James, a chimney sweep (1861), and Mary.