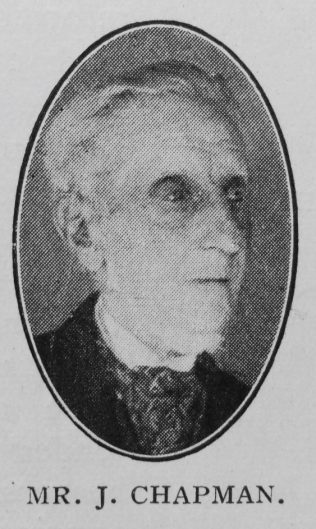 Transcription of obituary published in the Primitive Methodist Magazine by J.C. Mantripp

“Let us praise our famous fathers; let their glory be recorded.” Bro. John Chapman was among the mighty men of our Church in the Wangford Circuit. Although more than eighty years of age he took an active interest in church affairs, and regularly took his preaching appointments. The week previous to his death he preached both morning and afternoon at Kelsale, and worshipped in his own church in the evening.

Brother Chapman was born at Bramfield, Suffolk, in September, 1830. His mother was left a widow with eight children. The travelling preachers slept at his home, having to share the bed with two of the children. Our brother’s early manhood was full of vicissitudes. He tramped to London and engaged in many occupations. He also tasted sin in many forms. Receiving at sea an injury to his back which necessitated his return home, and kept him a prisoner for more than a year, he was visited by a friend, who urged him to decision for Christ. His conversion took place after his recovery while he was at work in a stable.

For fifty years he was a member of our Church at Yoxford, Local Preacher for forty-eight years and a Class Leader. As a sick visitor he excelled. He walked many hundreds of miles to preach; at camp meetings he was much in request. He was the instrument in winning many from sin to righteousness. In his own village he was honoured for his upright and faithful living. At the time of his funeral every shop and home showed signs of respect. In political life he was alert and active. For some years he was a member of the Parish Council.

The end came peacefully. He was ready and anxious to be with Christ. He died on August 22nd, 1911, and was buried in the Yoxford Cemetery by the Circuit ministers on the 25th. There was a large company of officials and members present. A memorial service was held at Yoxford on Sunday evening, Sept. 3rd, when Rev. J.C. Mantripp preached. Great sympathy is felt for his widow, a local preacher who was his companion in many of his preaching appointments.

John was born in September 1830 at Bramfield, Suffolk, to mother Catherine.

He married Elizabeth Louisa Lincoln (1840-1927) in the spring of 1862 in the Blything Registration District, Suffolk. Census returns identify one step-child.