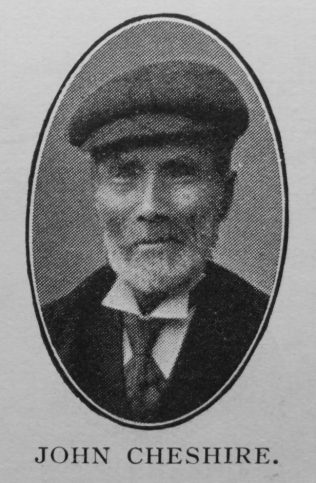 Another aged veteran of the Cross of Christ has finished his work, after having served his day and generation faithfully for eighty-two years. Born April 2nd, 1828, in the village of Whitchurch, in the Aylesbury Circuit, when four years old he was sent to our Sunday School, and there he received what education he ever had. Before he arrived at man’s estate, he gave his heart to the Lord and became a teacher and then Superintendent of the School.

His name was placed on the plan during the ministry of the Rev. T. Jackson, forty-seven years ago, since when he has rendered great service as a plain, wholesome preacher. In that wide Circuit, some of the places being fourteen miles from his home, neither distance, snow nor rain daunted Mr. Cheshire. Off he would start travelling the fourteen miles out and back again, sometimes coming home wet through and weary, but rejoicing because he had been enabled to do his duty.

He married the wife who now survives him sixty-one years since, and they lived a happy, long life together, and had a family of thirteen children, eight of whom are still living. Of a very independent disposition, honest, and industrious, believing in helping himself, Mr. Cheshire succeeded so well that he was enabled to spend the latter years of his life without having to work, and has left his widow in comfortable circumstances.

Nearly fifty years since he came to reside in Aylesbury, and about twenty-five years ago he removed to the Tunbridge Wells Circuit to manage Tangier Farm for Mr. Snowden, a thorough-going Primitive, who greatly respected him for his faithfulness to duty. Mr. Cheshire took a very active interest in the Church that was established in an upper room in one of the farm buildings, and which increased and prospered under his and his wife’s fostering care.

About four and a half years since, owing to the weight of his years, he gave up his work and settled at Stoke Mandeville, near Aylesbury. He preached his last sermon in our Church at  Aylesbury in October, 1908. His last days were spent in waiting for the Master’s call. He had held nearly all the offices a layman can hold, and had discharged his duties satisfactorily for many years. He was loved for his honesty and straight- forward conduct, his integrity and goodness.

He passed away quietly on the 16th Of December, 1910. The funeral took place on the 21st of December, and was numerously attended. A service was held at his late residence, conducted by the Circuit Minister, Rev. T. Hunter, who also officiated at the grave in the Churchyard at Stoke Mandeville.

And so one after another the fathers pass away to their well-earned rest. May the rising generation worthily fill the places of these departed veterans, and carry forward successfully the work so well begun.