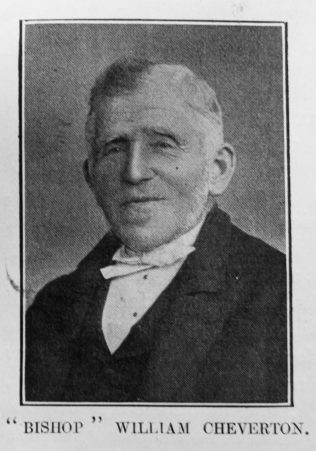 Transcription of Sketch in the Primitive Methodist Magazine the in series “Links with the Fathers” by Rev. W. Bridge

“YOU will have to go into the ministry.” The words were spoken by one of our early ministers to the subject of our sketch. “Sir,” he replied, “if the call should be made clear I hope I shall respond to it, but at present it is not clear.” “Then you will starve,” was the reply. Apparently the call was not made clear, for our friend married and settled down to farming. For a time it seemed as though the prophecy was to be amply verified. For years heavy loss succeeded to heavy loss, until ruin seemed to stare the young people in the face. One day while at work about half a mile away from home, his wife walked through the rain and said to him, “Make up your mind for something great.” He said, “I shall not be surprised at anything, not if anyone gave me a farm, God hath infinite resources and I expect great things from my heavenly Father, who has heard my many prayers and cherished in me great expectations.” Mrs. Cheverton then handed her husband a letter which read:
“Hearing of your sad trouble I am proud to be in a position to assist you; the £200 I send you, you must look upon as a gift from the Giver of all things, Who has kindly permitted me, I hope, to turn your sorrow into joy. I remain your friend.”

From that day to this the unknown friend has never been discovered.

Brother Cheverton’s memory goes back to the coming of the Rev. William Harland, the first Primitive Methodist minister to the Island, sent by the Hull Circuit. He declares that had the ministry been sought through no more suitable appointment for pioneer missionary work could have been made. “He was a mighty man,” said Mr. Cheverton – “mighty physically and intellectually.” He delights to relate how Mr. Harland captured an audience at Castlehold Baptist Church, Newport, after it had been frozen into torpor and silence by a pretentious “paper” speech of the previous speaker. Of Thomas Holliday, Mr. Harland’s successor, he also speaks in the highest terms. Indeed he thinks there is no ministry like the Primitive Methodist ministry.

Though our friend did not enter the regular ministry, no man has probably done more or as much for Primitive Methodism in the Island, as he, and for long years he has been known as the “Bishop.” To Shanklin, Roude, Lake, Yarmouth, and Hunnyhill, he was the pioneer of our Church. He tells how, as a young man he went to mission Shanklin in much fear and trembling. Coming in sight of the town his courage failed him. But getting on his knees, even as Ride and Russell did in Ashdown Forest, and, one conceives, as many another labourer in our Zion has done, he sought grace and strength of God, and afterwards entered upon his work. When he had delivered his message, he walked on to Lake, the next village, sat down by the way side and went to sleep. On awaking he called at the first house he came to, where he found a good Samaritan who gave him his tea. He told the people he was about to preach in the village, and away he went, singing along the village street all alone, and preaching the Gospel as he went

How many miles he has travelled, how many Camp meetings he has taken part in, or how many sermons he has preached, our friend does not know, as he has kept no record. In the old days he was frequently out the whole thirteen Sundays in the quarter. His daughter remarked to the writer that they seldom seemed to have their father at home.

Nor has our brother been without seals to his ministry. To his neighbours he has been the sent of God to guide them into truth. At one place at which he preached, one person said to another, “If my dear father is in heaven to-day, it is through Mr. Cheverton,” while still another testifies to receiving more blessing through Mr. Cheverton than through any other man.

Brother Cheverton has frequently represented his circuit at the District Meetings, and delights to tell of some of the great Camp Meetings in the old days when the districts covered wide areas and were attended by scores of ministers and the Camp Meetings by thousands of people. As the result of a sermon preached at the Camp Meeting at Gillingham District Meeting, he received invitations to preach at Stamshaw, Summer ‘s Road, St. Denys, Wilton, Bournemouth, Salisbury, Sturminster, Newton, Basingstoke, Weymouth, etc., etc. For eight successive years he preached the Chapel Anniversary Sermons at Stamshaw.

As a preacher he has always had a really marvellous flow of language. His style is rhetorical, thought is clothed in fair and flowery forms, and he can still turn a couplet with the best. In the summer time he takes an occasional service, though, as his home is two miles away from our Newport Church, his visits now are very infrequent. He takes, however, a lively interest in the affairs of his Church, both locally and connexionally. The current number of the ALDERSGATE lay on a table at his side as we talked. Asked how he liked it in its new dress and contents, he expressed his great delight at the improvement, a delight, by the way, of which one hears on all sides.

Though eighty-six years of age, our friend is a young man yet. Cheery, keen, alert. The day I saw him (March), he was up at 4.30, and every day he is the first up in the household, the whole year round.

Until six years ago, the dear wife of his youth was spared to him. For long years the Missionary Deputation made his home at Durton Farm, and a right good home it was too.

His children are verily sons and daughters of his right hand. He has given one daughter to a Primitive Methodist Manse as the wife of the Rev. J. T. Gooderidge, of Nottingham. Another, now the mistress at the farm, is the mainspring of a large undenominational Pleasant Thursday Evening in Newport, while the only son remaining at home is a local preacher and choir leader of our Newport Church. We pray for our friend a long and happy eventide, and finally an abundant entrance through the pearly gates into the City.

William was born on 27 March 1821 at Newport, Isle of Wight, Hampshire, to parents William Cheverton, a baker, and Jane Mitchell. He was baptised in the Wesleyan Chapel, Newport on 9 April 1821.

William’s farm, situated in the parish of Arreton, was 84 acres at the time of the 1851 census.

He married Hannah Prior (abt1824-1900) in the summer of 1846 at Newport, Isle of Wight. Census returns identify nine children.