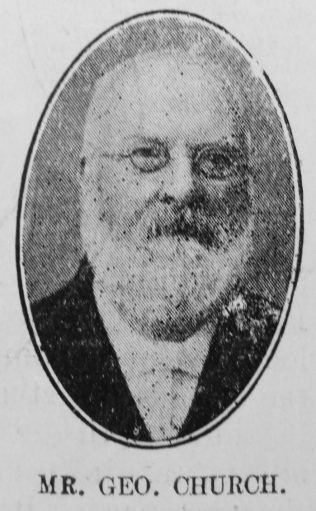 MR. GEORGE CHURCH was born at Northampton, April 15th, 1838. Died December 30th, 1908. His strenuous life was spent largely in the service of his Master. He was an eloquent preacher of the Word from his twenty-first birthday, and as time passed by he became one of the most popular preachers in South Staffordshire. So great were the demands made upon his time as a preacher, it necessitated close application to books, and long before the twilight of years fell upon him he was held in high esteem as a man well informed in theology and general literature.

For fifty years he preached in village and town pulpits, and much of his matured thought, expressed in language chaste, is re-membered to-day. For twenty-five years he guarded the treasures of West Bromwich circuit as its faithful steward. Loyal to the claims of office, true to the interests of the circuit, unaffected in his piety, genuine in his relationships to his brethren, he was loved by all and became the guide and friend of those who knew him well.

His ideals were high, his tastes refined. He may be described as a typical nature’s gentleman, in whom the mind of Jesus dwelt. His sympathy was boundless, his sense of justice strong. His guiding creed was—let every man have a chance, and do not fail to count his aspirations. He has left a noble record—a heritage into which we have not failed to enter. We pray for his sorrowing widow and bereaved family.

George was born on 15 April 1838 at Northampton, Northamptonshire, to parents William Church, a shoemaker (1841, and Jane Bullock.

He married Elizabeth Dingle (abt1842-1917) in the spring of 1857 at Northampton, Northamptonshire. Census returns identify eleven of fifteen children.