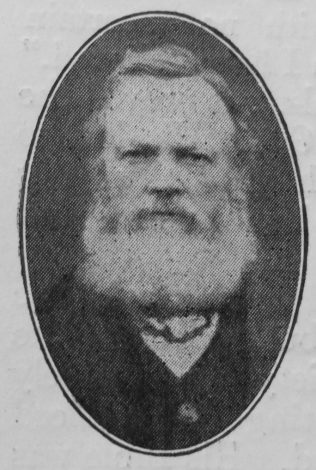 By the death of Mr. T. Clapton, Senior, the Skelton Church has lost a diligent and consistent member, and the Guisborough Circuit an experienced and faithful official.

He was converted nearly fifty years ago and during that time has rendered most loyal and valuable assistance in all departments of church work and life. For some years he was a local preacher in the Witney Station, but forty years ago he came into Cleveland and spent that time in the Staithes and Guisborough Circuits. He was most faithful and diligent in all his pulpit work, and was never known to miss an appointment. He also took the greatest interest in the Sunday School work, was a most successful class leader, and at the time of his death was a trustee for Skelton and Boosbeck Chapels and the Circuit House.

His great characteristics were his thoroughness and his goodness, and he was held in the highest respect not only by the members of our church but by the general community.

A few years ago he suffered an accident from the effects of which he never fully recovered. It became evident to all that slowly and surely “the silver cord was being loosed.” ‘The last days were full of pain and weakness, but his faith and trust in Jesus were never brighter.

The death of his son and namesake on December 4th, 1907, also saddened the closing hours, and twelve days later he passed to join him in the Homeland. The funeral service, conducted by the Rev. J. Toyn, was largely attended. His memory and service will long be fragrant.

We pray that Divine grace and consolation may be given to the widow and members of the bereaved family.

Thomas was baptised on 12 January 1840 at Tilehurst, Berkshire. His parents were John, a labourer, and Rachel.