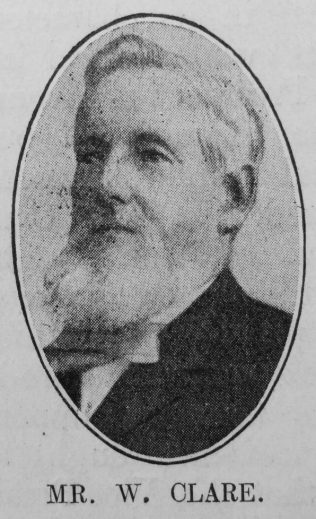 Transcription of Obituary published in the Primitive Methodist Magazine by J.W.V.

William Clare belonged to that army of great men who do noble service but avoid Connexional recognition. Born at Mosley Common, Lancashire, in 1832, he died Oct. 29th, 1908, at the residence of his son-in-law, the Rev. J.W. Venables, Norwich. Joining the Church in 1848 he became a teacher and commenced his long service as choirmaster. Though possessing considerable gifts of speech reserve prevented him from becoming a preacher.

When twenty-three years old a collier’s accident brought him to death’s door. Long months of convalescence were used to repair early deficiencies in education. He was helped-by two friends who survive him, Mr. (afterwards the Rev.) James Crompton and Mr. Richard Crompton. Incapacitated for pit work he became messenger at Kearsley Chemical Works. Continuing his self-culture he became clerk, cashier and, eventually, secretary: trusted, respected and, finally, revered, until he retired after more than forty years’ service.

He undertook the conductorship of Walkden choir during a crisis in its history, and for fifteen years so trained its singers that the memory of those days and that singing is still green. Leaving the larger church he came to help the new cause at Worsley Road nearly forty years ago becoming treasurer and class leader and correspondent of its day schools. He initiated a scheme which first rendered debtless the school in which the church worshipped and which then built and paid for the present handsome chapel. He celebrated the jubilee of his membership by a thank-offering of the last £50 required for this scheme.

For thirty years he was steward of Walkden Circuit, and though latterly younger hands relieved him he was senior steward until his death. His house was for years the preachers’ home and many remember his kindness and that of his wife (happily still with us). His help to all neighbouring churches and his private benefactions enshrine his memory in many grateful hearts. Few have equalled him in sagacity, generosity, unstained character, ready service and lifelong loyalty to the church of his early choice.

William was born in 1832 at Mosley Common, nr Tyldesley, Lancashire, to mother Mary Clare, a weaver. He was baptised on 23 September 1832 at the chapel of Ellenbrook, Eccles, Lancashire. The baptism record identifies Thomas Seddon, a labourer, as the reputed father.