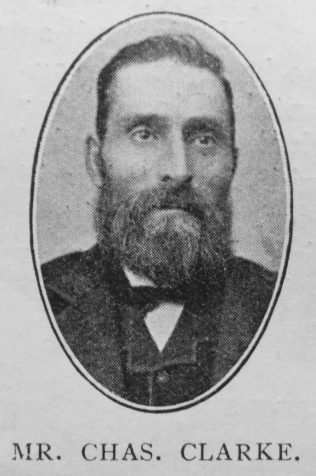 Transcription of obituary published in the Primitive Methodist Magazine by Wm. Lawrence

Brindley Ford Society, Bradley Green Circuit, has sustained a heavy loss by the death of Mr. Charles. Clarke, October 19th, 1909. Born at Minsterworth, Glos., 1836, Mr, Clarke had no education and began farm work when nine years of age. In early manhood he joined the army and served in the Indian Mutiny. Having served his time he returned to this country, and in 1867 surrendered to the Lord, became a Sunday School teacher, and the following year was put on the plan.

At Norton Green, Ridgeway, and Brindley Ford he rendered signal service to our Church as trustee, society and trust steward, class leader, Sunday School teacher, and in many other ways. Mr. Clarke represented his Circuit on District Committees and in District Meeting.-

A member of the first Parish Council of Brindley Ford, he held his position on the Urban District Council until his death. He was to have been Chairman for the present year. An ardent Liberal, our brother did good work at the Election of 1906 as District Agent.

When the serious nature of his last illness was made known to him, Mr. Clarke said, “I don’t know that it matters. When the Resurrection morn dawns I shall have nothing to do but answer to my name.” An impressive memorial service was held in Brindley Ford Church, Nov. 21st, by the writer. The church was well filled, many coming from a distance to show their respect for a comrade who had “gone before” to his rest and his reward.

Charles was born in 1836 at Minsterworth, Gloucestershire. His father was Joseph Clarke.

Note: Some records have the surname Clark and some census returns identify the birthplace as Painswick, Gloucestershire