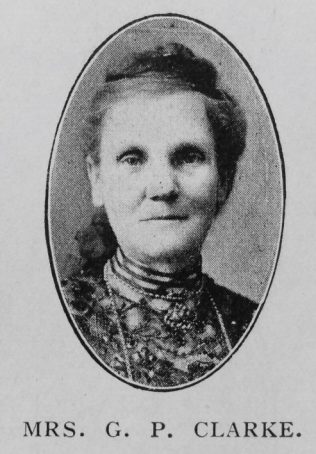 Transcription of obituary published in the Primitive Methodist Magazine by S. Sterns

Elizabeth Clarke was born at the village of Sapcote, in the Hinckley Circuit, July 29th, 1845. Here parents were honoured members of the Wesleyan Methodist Church, and in her earlier days taught her to love the work and worship of God. Converted about the age of nine years, Sister Clarke has been a member of the Church ever since.

In July, 1872, she was married to Rev. G. P. Clarke, and took her place in the active work of the ministry, going straightway to Canada when the Methodist Union proposals were at their height in Canadian life. This was at the same time that Thomas Guttery and John Fletcher Porter and others went out, not, it must be confessed, to further “Union.” However, it was seen to be not only inevitable but desirable in the interests of the Church of Jesus Christ.

While out in Canada Mrs. Clarke entertained such workers as George Lamb. It will be remembered by many that when Dr. Antliff visited the Canadian Conference there was a scheme to establish Primitive Methodism in the North-West territories. Our sister travelled that great district for twelve months, living a true missionary life, with all the hardships of pioneering.

When Brother Clarke and his wife returned from Canada they were sent to open a mission in Bournemouth, in which Mrs. Clarke took a more than ordinary share. They laid the foundations of what has proved to be a successful work well and truly. In all the Circuit and official life of the Church of her choice she has been a true helpmeet. Her work was done in the style of “one by one” for the Kingdom. With a character that was saintly, the light of her religious life was never under a bushel, and until the very last she did her part nobly.

There have been abundant testimonies from those who recognised and realised her gracious and enriching influence while in London and elsewhere. Her interest in the Sisterhood at Central Hall, Bradford, was unwearied, and her power was unique. The glory of motherhood was seen in the devotion of her children and home life. It has been said of her that “she lived for her daughters, and that her daughters lived for her.” Surely the most beautiful testimony that could be borne to her saintly life. Our sympathies go out to Brother Clarke and his family in their great bereavement, for what Mrs. Clarke has been to her loved ones none but they can tell.