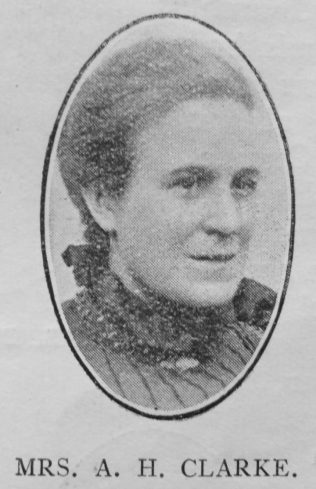 Transcription of obituary published in the Primitive Methodist Magazine by J.G. Ferriday

Gertrude, the beloved wife of Mr. A.H. Clarke, was born at Swindon, June 26th, 1873, but two years afterwards removed with her parents to London. She lost her mother when she was seventeen years of age, and her father a few years later. Engaging earnestly in Christian work at Surrey Chapel, where she had been connected from childhood, in 1902 she was married to Mr. Clarke, one of the officials of the Church. The year after they removed to Cardiff, and at once threw themselves heartily into various departments of our Church work.

While living such a busy, useful life, she was struck down by that dread disease, consumption, in its most painful form, and her sufferings were intense, but borne with quiet courage. Never could there be seen a more beautiful manifestation of simple trust and absolute leaving of everything in God’s hands. When, a few days before her death, it was revealed to her that her days here could be but few, she calmly looked up into her husband’s face, and, with a smile, quietly said, “Well, you know it will be all right.” A few hours before leaving this world she turned to an empty space in the room, and, after apparently listening for a moment, said, “All right, I am coming.” Then to her husband she added, “That was my mother looked over my shoulder.” Thus her spirit, without a struggle, entered into rest July 31st, 1909.

She left a little son about eighteen months old. The memory of her beautiful and sterling character is a great comfort to her dear husband and relatives. The funeral took place August 4th, at Cardiff Cemetery, and was attended by a large number of friends. A memorial service was conducted by Rev. J. Middleton, who made appropriate reference to her devoted life.

Gertrude was born on 26 June 1873 at Swindon, Wiltshire, to parents David Haines, a school keeper (1881), and Mary Edgeworth.

Gertrude was a school teacher before her marriage.