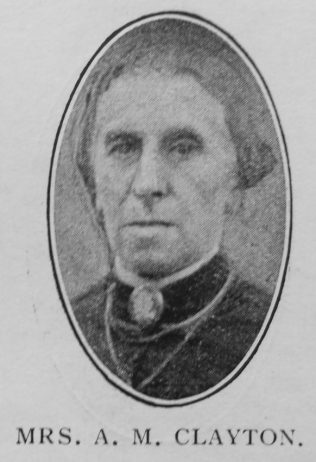 Transcription of obituary published in the Primitive Methodist Magazine by R. Curson

Ann Moss Clayton, widow of the late Rev. William Clayton, was born at Retford in 1832. She fell asleep in Jesus at her residence, Queen Street, in the same town, on Sunday, May 22nd, 1910. She was associated with our Church all her life. Her father, the late Mr. Charles Sutton, one of the most devoted and generous of the early officials of the Retford Circuit, received his first class ticket in 1820, only about two years after the introduction of Primitive Methodism to the town.

From girlhood up to the time of her marriage she was.actively engaged in the work of the Sunday School and Church at Retford. Then for thirty-seven years she was the faithful helpmeet of her husband in his ministry on Circuits within the area of the old Nottingham District. On their superannuation, in 1892, Mr. and Mrs. Clayton settled again in Retford, and rendered most valuable service to our Carolgate Church and the Circuit.

Since the death of her husband, nearly seven years ago, Mrs. Clayton has been in failing health, but her interest in the Church and its work has never flagged. She valued her membership highly, and continued generously to support the various funds.

For a few weeks before the end she was almost entirely confined to her bed, and sank into a state of extreme physical weakness. She retained consciousness, however, almost to the end, and frequently talked of the Church she so loved, and expressed her joy that her only son, Mr. W.H. Clayton, of Chesterfield, was devoted to the Church of his parents. During the years of her failing health her daughter, Miss Lily Clayton, has been her constant companion, and has lovingly ministered to her need. And in the final illness Mrs. Caldwell, of Sheffield, another daughter, and Mrs, W.H. Clayton, daughter-in-law, shared with Miss Clayton the duties of the sick-room, and by their tender and devoted ministries helped to make the passing of their dear one a fitting prelude to the rest and joy into which she has now entered.

The interment took place at the Retford Cemetery, in the same grave which holds the dust of her husband and a daughter, and was preceded by a service held in our Carolgate Church, the Revs. R. Curson and W. Robinson officiating.

Ann was born in 1832 at Retford, Nottinghamshire, to parents Charles, a master bricklayer (1851), and Ann. She was baptised on 19 February 1832 at Clarborough, Nottingham.