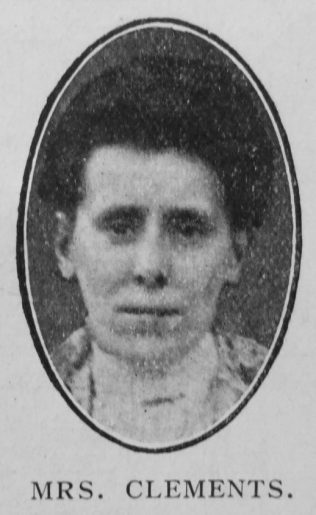 After a long and painful affliction, Mrs. Clements, the beloved wife of Rev. E. Clements, of the Ebbw Vale Circuit, peacefully entered into rest Sept. 16th, 1911. Born in 1868, she was the daughter of Mr. and Mrs. G. Atkins, of Holloway Circuit. Early led to consecrate her life to Christ, before her marriage she was an active worker with the Durham Road Church and Sunday School.

In 1892 she married Rev. E. Clements, and shared the toils and triumphs of his ministry in Belfast, Gloucester, Ealing, Portsmouth, Huddersfield, Southend, and Ebbw Vale. In a quiet, unassuming, yet effective manner, she did her best—sometimes beyond her strength—to serve the Church and to sustain her husband in his great work. On each Circuit she won the confidence and affection of the people.

Rev. D.T. Maylott says:— “Your sainted wife was such a gentle, sweet spirit, that all who came into her company felt the influence of her quiet disposition. There was a regal serenity in her personality—winsome and benign—that impressed me.”

During the last two years of her life she suffered much. After undergoing a serious operation she peacefully passed away. After a brief service in the home, conducted by the Rev. James Whittock, her remains were conveyed to her father’s residence and were interred in the Finchley Cemetery, in the midst of a large concourse of sorrowing friends. Revs. D.T. Maylott and W. Roberts officiated. The death of Mrs. Clements is deeply regretted by the officials and members of the Ebbw Vale Circuit, and much sympathy is felt for the aged parents and Mr. Clements and his five children in their sad bereavement.

Elizabeth was born in 1868 at Islington, Middlesex, to parents George Atkins, a builder (1881), and Sarah Alger.

She married Edward Clements (1864-1946), a PM minister, in the spring of 1892 at Islington, London. Census returns identify five children.