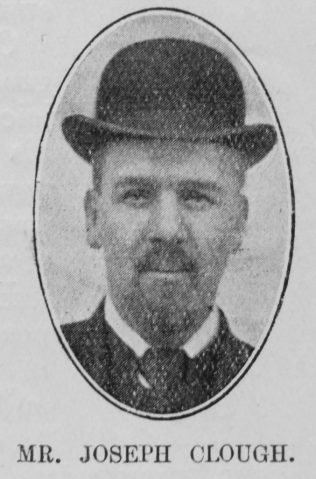 Brother Joseph Clough was born at the mining village of Shotton, in the County of Durham, in the year 1855, and died with startling suddenness at West Stanley, in the same County, on October 26th, 1908. He passed his boyhood at Shotton, from there the family removed to Haswell, a neighbouring village, where he spent twenty-three years of his life. He began work as a miner at Haswell.

Upon his conversion he became a member of the Haswell Terrace Society in the Thornley Circuit. At Haswell Terrace he became a Sunday School teacher, and then a local preacher. In 1890 he removed to West Stanley, and from that time to his death he continued a faithful and useful worker in the church of his choice. He held many offices, and faithfully and efficiently discharged the duties of them all.

In addition to being a local preacher and Sunday School teacher, he held the office of class leader, and was an active member of the trust board. He was a familiar figure at all official meetings in the station, and his counsel was always shrewd and intelligent.

The leading trait of his character was perhaps his fidelity—he was a man who could be depended upon. He received the Connexional Diploma for twenty-six years’ faithful service as Sunday School teacher.

His end came very suddenly. Though some of his friends knew he was unwell, few were aware of the serious nature of his complaint. He was privileged to attend the services of the Church he so much loved up to the time of his death, and then suddenly he passed from a lively interest in the Master’s work down here to an eternal participation in it in the world beyond. He was not for God took him. If absent from the body he is present with the Lord.

A large number of his fellow local preachers attended his funeral and walked in procession in front of the coffin. The funeral service was conducted by the Rev. T. Sellors and the writer. He leaves a widow and two sons to mourn his loss.

Joseph was born in 1855 at Shotton, Co. Durham, to parents Thomas Clough, a cool miner, and Mary hall.