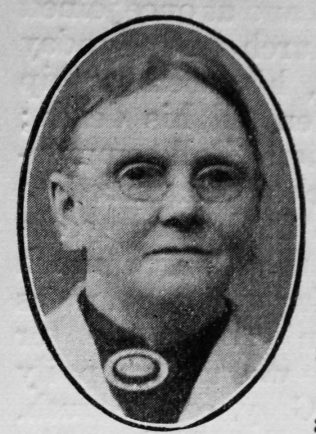 Spring Vale church has been called upon to suffer a severe loss by the death of Sister Fanny Cocker, the oldest member, who had been identified with it from its inception. The whole course of our sister’s Christian life was steadfast and exemplary. By nature she was shy and retiring; she had no idea of making herself a conspicuous figure in the world, preferring to serve the Master in the ordinary duties of life. She was the very pattern of a mother and of a Christian, cheerful in sorrow, patient in suffering, and resigned to the Will of God in the midst of bereavement. Her deep interest in the church and all that pertained to its welfare remained unabated to the end. As she was the most conspicuous figure in the church, her death created a gap which will not be easily filled.

She passed away on Thursday, October 3rd, after a brief illness. Her remains were laid to rest in the Darwen Cemetery, five days later. In the Spring Vale Church a solemn service was conducted by the Rev. J. Wright and the Rev. T.H. Hunt gave an impressive address. The funeral cortege then wended its way to the cemetery where amid the sympathetic silence of a large company, our sister’s body was committed to the dust by the Rev. J. Wright, the final prayer being offered by Rev. T.H. Hunt. The following Sunday an “In Memoriam” service was held in the church, when the circuit minister preached an appropriate sermon to a full congregation. Thus after over seventy years of this mortal strife, Sister Fanny Cocker sleeps in Jesus.

For her bereaved children, all of whom, eight in number, are in association with our church, we pray the blessing of the Comforter.

Fanny was born in 1837 at Darwen, Lancashire, to parents Richard, a power loom operator, and Jane.

Fanny worked in the mill before and after her marriage.