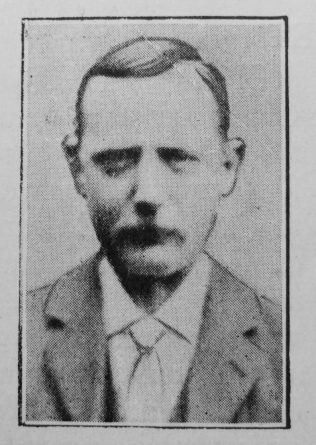 In the fulness of a rich manhood, Ralph Cocker was called to bear fruit in the heavenly vineyard. His translation came as a sore bereavement to wife and children and church and school at Darwen, where he served with marked efficiency as assistant superintendent and Society steward. Deeply solicitous for the welfare of the church, her very name was graven on his heart. A man of noble ideals and deeply religious spirit, he loved the services of the sanctuary and especially the class meeting. Again and again as he has offered the opening prayer at class, we have been thrilled with feelings of tenderness and devotion. Reasonable and intelligent, his religion was absolutely devoid of intolerance or narrowness, yet he held tenaciously the verities of the evangel of Jesus. In him tenderness and strength, beauty and manliness, unaffected piety and deep spirituality all blended and were all turned into the channel of practical service. To the young he was a friend and a brother, presenting the beauty of holiness and the delight of religion. His natural brightness infused gladness into all the relationships of life, and he was a model of sympathy, faithfulness and devotion. Upright and conscientious in business, he was dearly loved by fellow-workers. Of all one knew he seemed the least to be spared from his abundant and beneficent labours.

The end came with startling suddenness, but he had lived in union with Christ and so he passed away. His noble life was crowned with a triumphant death. He experienced what Leighton said long ago, “Christ hath perfumed the cross and the grave, and made all sweet.” Shortly before he crossed the bar he sang a song of triumphant faith to the refrain, “I do believe, I will believe,” etc., as if already among the celestial choir.

After a pathetic but very beautiful service in his beloved church, conducted by the writer, assisted by Mr. J. T. Fielding, devout men and women followed him to his burial place. His name and work will long be fragrant. He leaves behind the memory of a laborious, useful life, a blameless character, and of great loyalty and devotion to Jesus Christ and His Church.

Ralph was born in 1862 at Over Darwen, Lancashire, to parents Samuel, a grocer, and Alice.