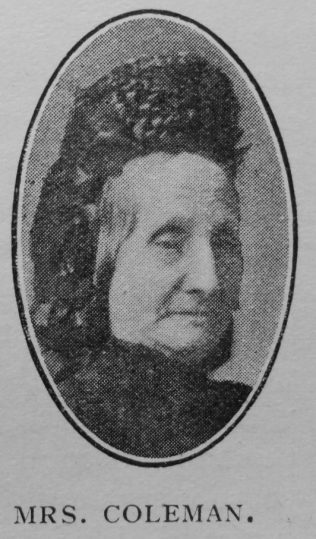 In the death of Mrs. Coleman, at the age of seventy-eight, the Church in Stewkley has suffered a great loss. She joined the society in her teens, and for over sixty years maintained an unbroken membership. Many have cause to remember her kindness, yet few knew of it apart from those interested.

Her home was the abode of peace, and she trained her children in the love and fear of God. She had her reward in seeing them active members of the Church. It was a great joy to her to see our beautiful church erected in the village. It was her delight to be at the service, and though it meant a drive of several miles, she was rarely absent.

During the years of her widowhood she resided with her daughter, Mrs. E. Horne, at Cottesloe. It was there, after hearing her grand-children say their evening prayers, that the angel of death touched her. The funeral service, conducted by the writer, assisted by Rev. A. H. Kynaston, was largely attended. The God of all comfort be with the dear ones.