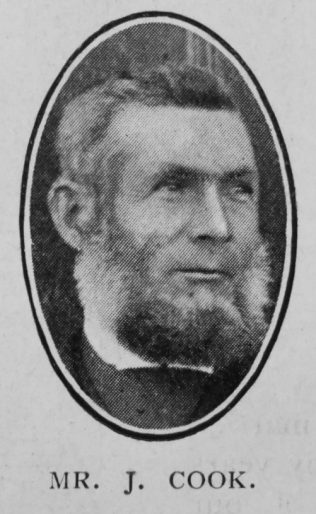 Transcription of obituary published in the Primitive Methodist Magazine W.H.M.

The late John Cook was born in the village of Melbourne, in the East Riding, 75 years ago. His self-sacrificing life has made his name a household word in and around the Pocklington Circuit. Converted 53 years ago he began to preach in 1861, and became an “accredited preacher” April, 1862, so that for 50 years he offered to men “a free and full salvation.” The pulpit, however, did not absorb the whole of his time and strength, since for many years he was a devoted and much-beloved Class Leader. He believed in the  old-fashioned Class Leader. He believed in the old-fashioned class meeting and suffered no little discomfort if he thought he detected in the members of his class, the least indifference to this weekly means of grace.

Notwithstanding his meagre educational advantages — for he had but three weeks “schooling” in his life – he met with no little success, and many are labouring with us today day who thank God John Cook has lived. Some months before his “passing” there were signs that his course was nearing its close, though the end was not thought to be quite so near. His sun, however, set with the setting of the Sabbath sun, Feb. 18th, 1912.

A most impressive service in our Melbourne Church preceded his burial on Feb. 21st. The writer delivered an address based upon Romans v.—a chapter which had greatly helped our friend at the last, and also conducted an “In Memoriam” service on the following Sunday evening, when the church was filled. He “fought the good fight, he finished the course, he kept the faith.” He has gained “the crown,” for he loved the “appearing” of his Lord. In a “fairer clime’’ may we meet him again!

John was born abt1837 at Melbourne, Yorkshire, to parents William, a carpenter & wheelwright (1861), and Mary.

He married Elizabeth Homley (abt1840-1873) in the summer of 1863 at Melbourne, Yorkshire. Census returns identify five children.

He married Ann (b abt1833). I have not been able to identify a marriage record or date of death for Ann.