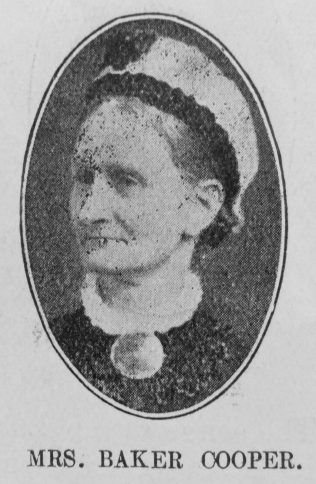 Transcription of Obituary published in the Primitive Methodist Magazine by J.T.

The Fimber Society in the Driffield Circuit has lost a true friend by the death of Mrs. Baker Cooper.

She was born at Waith, Lincolnshire, on December 27th, 1832. Her maiden name was Mary Temple. She belonged to a Methodist family. Removing to “Borrow,” a farm-house between Driffield and Langtoft, the family proved a useful addition to the Wesleyan Methodist Church of the district, Mr. Temple being a local preacher and class leader.

On July 8th, 1847, she gave herself to the fellowship and service of Jesus Christ in her own bedroom, and on the following night her brother and several of the farm servants were converted to God.

She at once joined her father’s class at Langtoft. Removing to Driffield sometime afterwards she united with the Methodist Church there. On February 11th, 1857, she married Mr. Baker Cooper, of Fimber, and at once entered into fellowship with our church, her husband being a local preacher and class leader. She threw herself into all kinds of Christian service.

Leading class, preaching the gospel, visiting the sick, collecting for the missionary cause, she won her way to the hearts of the people for miles around the little village of Fimber. Her love for God and His work was intense and constant. How she did delight to talk about the work and ways of the Lord. To the last her confidence in Him was unshaken, while her outlook was radiant with the hope of immortality. She passed to the “fair world” on February 6th, 1909, “leaving behind her an honoured name, and the fragrant influence of a life of useful service for the Master whom she loved.”

In the churchyard on the hill her body was laid to rest on Tuesday, February 9th, in presence of a large number of relations and friends, the curate and the writer dividing the services in harmony with her wish. Farewell, till the morning breaks and the shadows flee away.