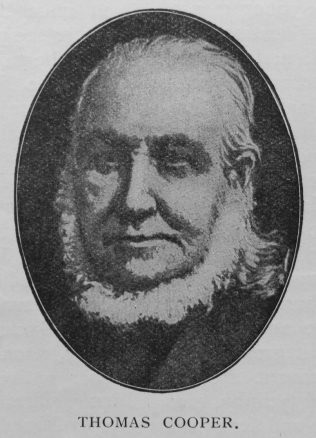 Transcription of article by Rev. Joshua Lindley encouraging others to read the autobiography of Thomas Cooper

THE name of Thomas Cooper, of Chartist fame, was better known in England during the middle period of the 19th Century than it is to-day. To forget him altogether would be a distinct loss, but there is not much danger of this, for his charming autobiography will keep his memory green for some time to come at any rate; and those who enjoy biographical reading will find this book both pleasing, instructive, and stimulating.

It is especially a book for young men of the working class, whose educational advantages have been small, and yet who cherish ambitions for a strenuous career in the world of thought and of action. Such readers will find in it a great deal of both encouragement and inspiration; it will supply also what the working men of to-day greatly need, viz., a true historical perspective of the political and social conditions out of which those of the present day have emerged.

To think of him as a Chartist agitator and nothing else would be an injustice. That he was a leader in that great movement and a formidable opponent of every form of political and social tyranny, was recognised by both friends and foes; but he was much more than a mere Chartist agitator. His career, both before and after those stormy days, was eventful and significant. He touched life at more points than the majority of men do, and the circumstances and events he records are made instructive, in that he was not a mere observer of, but an active and vigorous participator in, them; and thus not only touched, but materially affected them. Possessing a strong physique, a vigorous, active, cultured mind, and great combativeness, he carried weaker men before him by the sheer force of his own character in any direction in which he himself happened to be moving at the time. We say any direction; for his life was not of that orderly, well-balanced type, that moves steadily towards one definite end; he changed his mental position more than once. He had the defects of his qualities, and one of them was that he never seemed able to look upon both sides of any question at one and the same time.

This must not be forgotten, for anyone tracing his changeful movements from time to time on questions pertaining to religion must come to the conclusion that some of his opinions as well as his reasons for holding them seem to require explanations, which he does not give. However, men must be taken as they are, and whether the portrait pleases or otherwise, it must be painted accurately, “warts and all,” if the highest ends are to be served. Our purpose, however, in this brief article is not critical, but to direct attention to a stimulating and instructive book, and one that will well repay a careful reading.

Thomas Cooper was born at Leicester on the 20th of March, 1805. His father was a dyer by trade and seems to have been nomadic in his habits, moving at short intervals from place to place. He died at Exeter when Thomas was a child of four, upon which, his mother returned to her native town of Gainsborough, in Lincolnshire, where she earned a precarious livelihood by dying and making card-board boxes, carrying them to the neighbouring villages and towns, and hawking them from door to door.

The story of his childhood days is painfully pathetic reading. He could remember quite well the battle of Waterloo and the peace that followed. These Continental wars were followed by bad trade, bad harvests, and burdensome taxation, which fell with crushing effect upon the poor. Together with these, the heavy duty upon corn raised the price of flour to six shillings a stone, and the utmost distress prevailed. By her own strenuous efforts and the occasional assistance of friends his mother managed to stave off actual starvation, although she did not always succeed in keeping the wolf from the door. They were often driven to great straits, and the condition of general poverty, which prevailed amongst the working classes at that time, made an indelible impression upon the boy’s mind and gave a sting to the fiery phillipics he hurled at the heads of the aristocracy. in his Chartist days.

Poor and depressing as their condition and environment were with only a two-roomed cottage, situated in a back alley, they managed to extract some rays of sunshine out of the dark days. The lower room served the threefold purpose of dyehouse, workshop, and living-room, and yet, poor as it was, they had a fair measure of contentment and even of joy, for in spite of the most unfriendly external conditions, Cooper felt even when a child a thirst for knowledge, which he pursued with such zeal, that at the age of twenty-four he had read more books and mastered more subjects than many do who have every advantage and are able to devote all their time and energy to the task.

When a mere youth of eighteen he spent from twelve to fourteen hours in earning his living, as a shoemaker, and then five or six hours were given to strenuous mental toil out of every twenty-four. The strain he put upon himself resulted in a total collapse, and for months his life was despaired of, but the work done laid the foundations of his future power. Upon his recovery, he left the shoemaker’s bench to become a school-master, and in process of time a reporter, local preacher, editor, Chartist agitator, lecturer, poet, and author.

One portion of his autobiography contains a graphic account of the missioning of Gainsborough by the Primitive Methodist Missionaries, and as this took place in the very early days of our Church it is worth quoting. Read in the light of to-day it shows how far we have travelled as a Church since then, in more ways than one.

“It was not until my fourteenth year that I was strongly impressed with the necessity of repentance and forgiveness of sin. One Sunday morning I ran out with a crowd of the neighbours to hear two men who were singing aloud as they walked along the street, on their way to the market-place— ‘Turn to the Lord and seek salvation!’ They were called ‘Ranters’ by the crowd; but I soon learned that they termed themselves ‘Primitive Methodists.’ These men remained in the town for some weeks and preached in the open air, and held meetings in houses; and the crowd, young and old, were greatly affected. Soon a society was formed, and they began regularly to preach in the very small chapel, which John Wesley himself caused to be to be built, in a small square, in Little Church Lane, but  which had been occupied as a warehouse for some time. I became a member of the society, in company with at least a dozen other lads, some of whom were older and some younger than myself. I cannot describe my anguish and sorrow for sin; and, apparently, it was an equally serious case with each of the lads. My grief continued for many weeks, until I could find no delight in my books, or drawing, or dulcimer, and could read nothing but the Bible, and was getting into secret places twenty times in a day to pray for the pardon of my sins

“Many loudly earnest preachers came and preached in the little chapel; and prayer meetings were prolonged till midnight often. And many up-grown sinners professed to find the pardon of their sins. The change of heart and life was real in some. I remember well an elderly man, an inveterate cockfighter, being humbled, and becoming a true penitent. This man lived for many years afterwards a consistent Christian life. Nor was his case a solitary one. On the other hand there were some fearful backslidings.

“Some of the boys at length professed to find the pardon of sin. For a day or two I believed I had received it; but as I felt conscious that I sinned, I supposed I must ‘act faith,’ as they said to find it again. And this acting of faith became in the course of some weeks so irksome to my mind, that my mere common sense revolted at the practice. We were told to ‘believe’; but I understood the teaching to mean that we were to believe ourselves into the PERSUASION that we were forgiven; and I could not avoid the conviction that this was NOT receiving pardon by the witness of the Holy Spirit, but pardoning ourselves. So I grew weary of creeping into corners twenty times in a day to repent for sin—for I thought I was always sinning—and of believing myself forgiven. I shrunk from the practice at last in sheer disgust; but neither did that bring ease to my mind. I began gradually to get back to my music and my reading; but some of the members of the society—poor men who knew little of books, but who found happiness in prayer and in hearing others read and preach about the goodness of God—demurred to my reading any book but the Bible, unless it: was ‘a truly religious book.’ My mind rebelled completely now; and I ceased attending the little chapel and began to go to the Wesleyan instead.”

This paragraph is both suggestive and illuminating, and is worth preserving as a striking picture of the intensity of spirit that animated our Connexional fathers. We see them here both in their strength and in their weakness.

Space does not admit a further survey of the life of this epoch-making man. He wandered away from the Wesleyan Church, in which he had achieved distinction as a local preacher, lost his faith in many things in which he had firmly believed, and became an agnostic. How he was restored and afterwards championed by tongue and pen the glorious gospel of Jesus Christ, must be discovered from the book itself. To criticise him were an easy task, but to learn how to do better ourselves, is the nobler part.

Wisely read, the life of a good man, even when it has been marred by mistakes and failings, is beneficial, and amongst the pioneers of progress in our social and political life Thomas Cooper played a noble and inspiring part. He died full of years and honours in the full assurance of salvation through Jesus Christ.