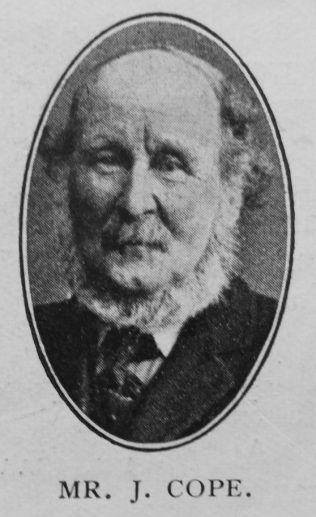 Transcription of obituary published in the Primitive Methodist Magazine by John T. Stead

John Cope was an Israelite indeed in whom was no guile. He was born at Winslade near Basingstoke in 1831, and was the son of labouring people. He was not blessed with much schooling. A dame’s school and a night school form were the colleges he attended. He went to work early. In 1856 he gave himself to God and to God’s people.

In 1863 he came to Wallingford, and soon after was put on the Preachers’ Plan; hence for 46 years was a local preacher, and for 52 years laboured in the Sunday School. In 1908 he had a silver medal presented to him by the Editor of the Sunday Circle for long service in Sunday School work.

He loved the House of God, and was an inspiration to the preacher in the pulpit. To see his beaming countenance as he sat near the rostrum, and to hear his hearty response was always a help. The week-night prayer meeting was his delight, and his place was seldom vacant. His name is like ointment poured forth throughout the Wallingford Circuit.

He was not rich in this world’s goods, but rich in faith. He was not learned or cultured, but like Barnabas he was full of the Holy Ghost and of faith. Though poor and unable to do much, yet he always had a share in anything that was being done. He finished his course without a parting word, yet being dead, he yet speaketh. It was a benediction to hear him repeat his favourite hymn,

“Let me labour for the Master from the dawn till setting sun
Let me tell of all his wondrous love and care,
And when all of life is over and my work on earth is done
And the Roll is called up yonder, I’ll be there.”

He passed away Aug. 9th, 1909, and was followed to his last resting place by many old friends and relatives.

He married Jane Maria Newland (abt1842-1922) in the spring of 1861 at Reading, Berkshire. Census returns identify ten children.