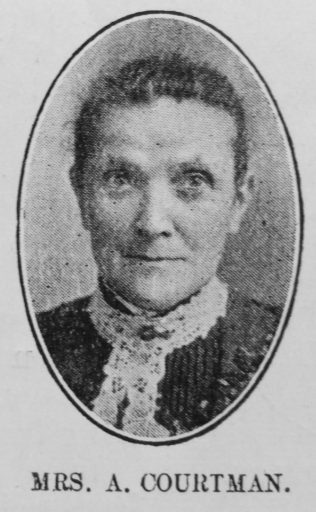 For over fifty years our sister had been a member of our Church, and with the exception of about six years for the whole of that time with our Church at Katherine Street, Ashton-under-Lyne. She came from Haughton Green to Ashton when a girl, and at once joined our Church, and became a Sunday School teacher at the age of fifteen years, and continued till after her marriage to the late Mr. W. G. Courtman—who was for nearly twenty-five years the choirmaster at Katherine Street. Her interest in the Sunday School ever remained, and for fifty successive years she never failed to walk in the Whitsuntide procession. A true Christian, she was never absent from the class meeting, or the Sabbath morning service, unless circumstances absolutely barred her attendance. Her children were brought to the class meeting and other services in their early years, and all are now actively associated with the church she loved.

In the early months of this year she was stricken down with illness, and her sufferings were intense. She, however, never murmured or complained and was ever most responsive to words of comfort and prayer. All that loving care and solicitous nursing could do for her was done, and the devotion of her children was beautiful. She realised that her Saviour and Lord was coming to take her home.

Often she would say, “Nothing in my hands I bring, Simply to Thy Cross I cling.”

Her last testimony was, “He promised He would never leave me, and He never has.”

The Lord called her to Himself on Sunday, April 18th, 1909. We laid all that was mortal of her to rest in Dukinfield Cemetery, amid many tokens of respect and love, and an “In Memoriam” service was conducted by the writer the following Sabbath in our Katherine Street Church. Miss Nellie Peplow sang “When the pearly gates unfold,” and we gave thanks to God for the faith that gives to us the assurance that our sister had passed through the pearly gates into the City of Gold.

Amy was born abt1845 at Haughton Green, Woodley, Cheshire, to parents John, a cotton weaver, and Mary. She was baptised on 11 May 1845 at St. Lawrence, Denton, Lancashire.