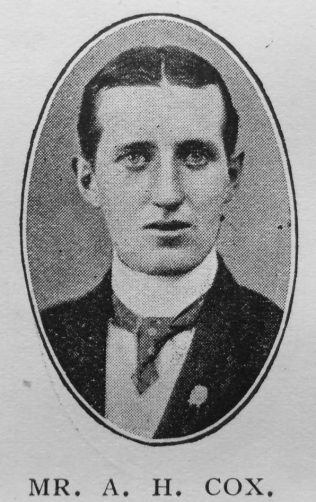 Transcription of obituary published in the Primitive Methodist Magazine by J. Watson Grayson

Albert Harry Cox, on March 13th, 1910, was called home in his 25th year, in the “Diamatine” Hospital, Brisbane, Australia.

“Bert”himself was early the subject of strong religious impressions, and he was for several years a scholar at our Upton Park Church, E. London.

He was fortunate in getting into the office of a great shipping firm in the City, and by his brilliant ability and application had been advanced to a responsible post with splendid prospects, when consumption manifested itself, and a stern fight for his young life began. After 12 months’ residence in a sanatorium he was discharged as apparently cured. But he was told by the physician that his only chance was in going out to Australia. He left England January 29th, 1909. He associated himself with the Y.M.C.A. in Brisbane, and openly and in public meeting confessed Christ.

His old trouble asserting itself, he was advised to enter the hospital, where he greatly improved, but haemorrhage set in and in an hour he passed away. He only had time to say ‘‘I’m going home.’’ He had been longing for his earthly home, but God took him to a better one. The news came as a terrible shock to those left behind in the old country, specially to his devoted mother, but the calamity was mitigated by the cheering thought that God had been preparing him for the change. The writer knew him intimately for many years, as a good lad, loving, amiable, and as a promising young man, fitted for useful Christian service, but we all leave him in the hands of One wiser than ourselves—his Father, God.

Albert was born on 24 October 1885 at West Bromwich, Staffordshire, to parents John Cox, a commercial clerk, and Ada Elizabeth Kidd.

The 1901 census return records Albert as a commercial clerk