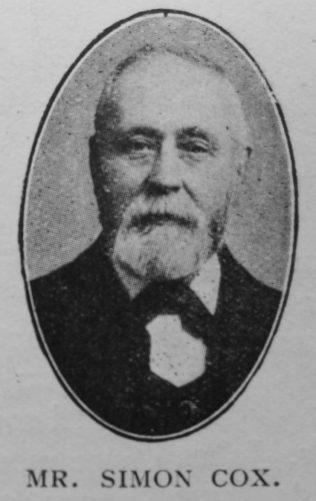 Transcription of obituary published in the Primitive Methodist Magazine by John W. Gregory

Mr. Simon Cox for fifty years was a member of the Hucknall Torkard Church. The son of Primitive Methodist parents, he was led by them in his very early days to give himself to the service of God, and when quite a youth joined our Church at Codnor in Derbyshire, where as a Sunday School worker he spent thirteen years, five years as superintendent.

In 1876 he removed to Hucknall Torkard, joined our Church, and for twenty years filled the important position of Sunday School Superintendent. As Trust Treasurer he devoted much of his time and energy to the erection of our present commodious church and school buildings.

Elected to various public offices, for many years he was a member of the Hucknall Burial Board. For the last four years of his life he was practically an invalid, and passed quietly away on July 22nd, 1910. He was interred July 25th, in the Hucknall Cemetery. His family are valuable members of the Church.

Simon was born on 6 February 1837 at Codnor Park, Derbyshire, to parents Thomas, a coal miner, and Mary. He was baptised on 31 March 1837 at Belper Primitive Methodist.