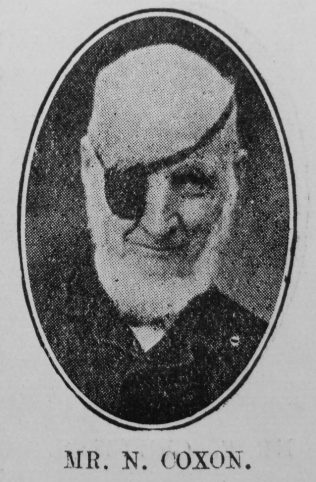 On June 4th, 1909, Mr. Nicholas Coxon, of Hetton Downs, in Hetton Circuit, peacefully exchanged mortality for life at the age of eighty-seven’ years. Born at Biggs’ Main, his parents were both members of the Primitive Methodist Church at Wallsend, in Newcastle Circuit, and when very young he was a regular attendant with his mother at the class meeting and services. In his early teens he became a member and active worker in connection with our Church at Ballast Hills, Newcastle-on-Tyne. After his marriage he removed to South Shields, and thence in 1860 to Hetton Downs, where he joined the first class under the leadership of the late Brother W. Soulsby.

In 1870 he was appointed a class leader and also treasurer to the trustees, his sterling worth, his special ability, his sincere piety and devotion to his church, marking him as admirably suited for these positions, which he held from 1870 till 1884. In 1884 he decided to go to United States, America, owing to the ill-health of his wife and daughter.

After fifteen months he returned to the home country and renewed his membership with his old Society at the Downs. He was at once appointed as leader to his old class, and this position he held until two years ago, when increasing weakness compelled him to retire, having been a leader for thirty-six years. He was an ideal leader, regular in attendance, a good visitor, and a man of upright and devout character. He had the joy of knowing that his four sons and two daughters are members of the same society.

In his last illness his faith in Jesus Christ was strong, the presence of the Saviour was a constant source of joy to him. His last words were a prayer for the two sisters attending him, “The Lord bless you both.”

On Monday, June 7th, the funeral took place, and was attended by a very large number. A service was held in Hetton Downs Church conducted by Rev. Johnson, assisted by Brother George Heslop.