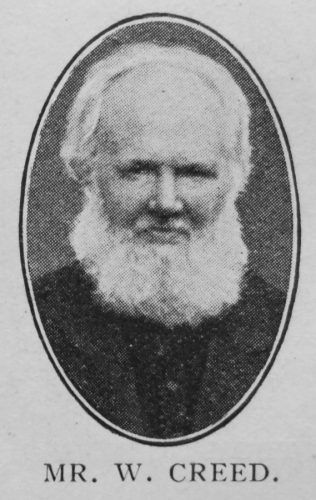 Transcription of obituary published in the Primitive Methodist Magazine by J.M.C.

Mr. Creed joined our Church when he was 21 years old, and for 66 years was a choice member. Assiduous in his attendance at the various services and an appreciative hearer, his warm attention brought out the preacher’s best. He was much given to hospitality, and his responses to the financial needs of the Church were liberal.

Of a sunny disposition, he never said anything uncharitable of anyone. In his religious views he was tolerant, and cherished goodness wherever it was found, irrespective of creed. He passed through bereavement and sorrow; these, however, mellowed rather than soured his disposition. No one ever thought of accusing him of insincerity. His religious life was characterised by a deep and rich assurance. Our departed friend was deeply respected, and all rejoice in the grand testimony he left behind.

The funeral service was conducted by Rev. J.M. Craddock. His family sorrow, but not as those without hope. Our brother is now with Christ, which is far better.

William was born on 3 July 1823 at Stroud, Gloucestershire, to parents  Robert Creed and Mary Millwaters. He was baptised on 12 April 1835 at the Wesleyan chapel, Alkerton, Gloucestershire.

He married Elizabeth Davies (1823-1863) in the spring of 1845 in the Monmouth Registration District, Monmouthshire. Census returns identify one child.