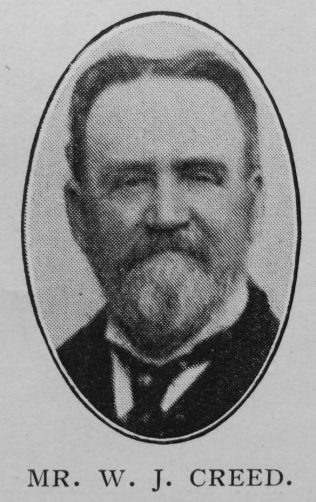 Transcription of obituary published in the Primitive Methodist Magazine by J.M.C.

Lydbrook Circuit has suffered a heavy loss through the death of Mr. William James Creed, its senior steward, who served our church for forty-two years. Superintendent of the Sunday School, with unfailing regularity he was at his post, making it a strong point to welcome his scholars as they came in. He was a regular attender and a splendid listener at the various religious services. Generous, and much given to hospitality, he was tender-hearted and the friend of the needy.

The minister ever found a warm friend and loyal supporter in him. A thorough-going Christian, he was ever firm and upright. His religious life was particularly bright. The funeral, on Easter Monday, was conducted by Revs. J.W. Jacob, J.A. Turner, D.J. Perrott, B.A., and the present minister.

William was born abt1847 at Lydbrook, Gloucestershire, to parents William Creed, a sorter in tin works (1861), and Elizabeth Davies.

He married Margaret Taylor (1848-1928) in late 1900 in the Monmouth Registration District, Monmouthshire.