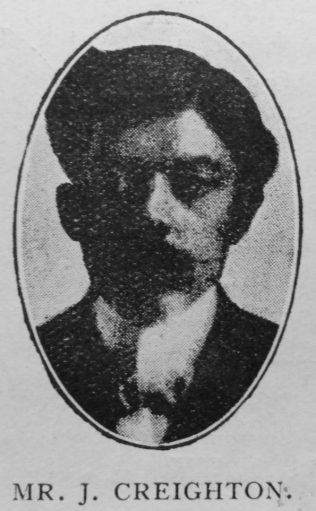 Death has never been far from us during the last four years in Hexham. Some who had longed to see the new church were taken away before the stones were laid or between that ceremony and the opening services. Others who had looked forward to years of service have been called to the Higher Life. Our brother, John Creighton, was much beloved by all.

He was born at Haltwhistle on August 4th, 1872. From his earliest life he was identified with our church and school there. It was delightful to hear him speak of the old ministers, preachers and teachers in Haltwhistle and district.

Eight years ago he came to Hexham, and in quiet and faithful ways served the Church. He was a teacher in the school, a local preacher, a member of the choir, and a leader in the C.E. Society. He was of gentle and loving disposition. For the last S.S. Anniversary at Easter he prepared the Children’s Choir. He was never robust and was often stricken with sickness. He had a wonderful artistic gift and his home was adorned with many works of his art.

His death came with painful surprise to his friends in all parts of the circuit. He went to God on November 18th, 1909. The present writer and his colleague conducted the services of interment, and referred to all the lovable features of his character. A widow is left and two little children. Much sympathy has been shown to them, and prayers offered for them.

He married Ann Briggs (1874-1932) in the spring of 1901 at Haltwhistle, Northumberland. Census returns identify two children.