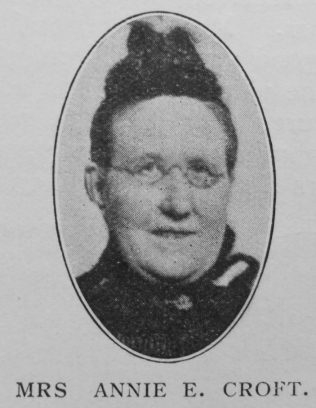 Mrs. Annie Elizabeth Croft, of the Duke Street Society, in the Doncaster Second Circuit, was born at Thorne in November, 1834, and passed away on Good Friday morning last after a prolonged period of suffering, at the age of 75, years. In early years she dedicated her life to the Saviour; and from her conversion, throughout the whole of the days of her activity, sought to be useful in extending the Kingdom of her Lord.

For several years she was employed by the Sheffield Town Mission as a sister of the People, and continued in that position until the time of her marriage to Mr. Samuel Croft, who now survives to mourn her loss. For some few years after marriage Mr. and Mrs. Croft remained in Sheffield, but ultimately removed to Doncaster and joined our Duke Street Society.

Mrs. Croft’s preaching gifts were quickly recognised, and she was soon invited to become a local preacher. For forty years she held a worthy position on the plan, her messages always acceptable, her prayers fervent and passionate, and her piety unquestioned and unquestionable. The intervening years between her first association with Duke Street and her decease saw her as a Bible Woman at the Nether Congregational Church, Sheffield, and as a local preacher in the Mexborough Circuit, and also at Liverpool, but all the time her love for old Duke Street was profound, and to her there was no church in the world so precious as the old sanctuary there. Regular in attendance while in health, she was ever solicitous about its well-being, even in the midst of her sickness.

Release from suffering came to her on the morning of 25th March last, and she quietly passed away to be “for ever with the Lord.” In sympathy we remember the husband and family. May they be graciously comforted of God.