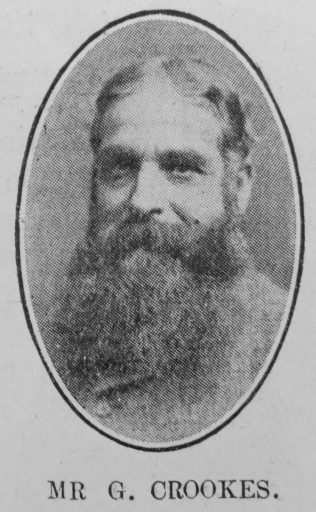 Transcription of Obituary published in the Primitive Methodist Magazine by W. Hayton

The men that are ever ready for holy toil, conflict or sacrifice are they who are missed when removed. Such was Brother Crookes. For a number of years he was one of the most devoted members and best officials of the Worksop Society. He held the offices of, class leader, assistant superintendent of the Sunday School, Society steward, and when Worksop was made into a circuit he was its first circuit steward, and filled every office with credit.

He had his own way in doing things and expressing himself, but behind all there was purity of motive and sincerity of purpose. The exterior of the man was somewhat rugged, but there was a fine spirit and tenderness of heart within. There was strength of character that made him fearless to do the right. Righteousness was the motto of his life. His religion was not a sickly sentimentalism, but a Divine principle that moulded, ruled and governed his life. You might trust him in any position he held, or anything he had to do. He was generous as a giver, and a consecrated toiler to the last.

For several months it was evident his health was giving way, and the end came rather suddenly, but he met it calmly and with a clear hope of a glorious immortality. May his widow and family meet him in the home eternal.

George was born in 1841 at Torworth, nr Blyth, Nottinghamshire, to parents Henry, a farm labourer, and Ann. He was baptised on 8 August 1841 at Blyth.