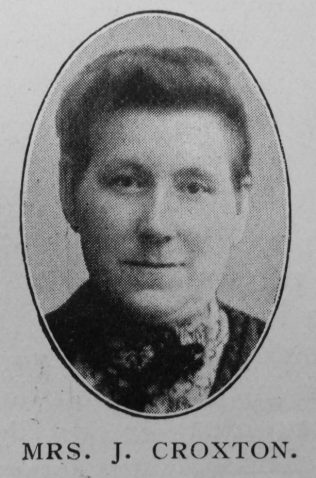 Transcription of obituary published in the Primitive Methodist Magazine by W.E.W.

Newcastle-under-Lyme Circuit has suffered greatly through the death of Mrs. Jane Croxton, July 16th, 1910. Born at Clunton, in Shropshire, July 26th, 1857, our sister early in life joined the Primitive Methodist Church, and showed a deep interest in Christian work, particularly Sunday School work, in which she laboured with marked success.

Married to Mr. John Croxton in 1883, the earlier years of their married life were spent in the Banbury, Shrewsbury and Lichfield Circuits, in each of which circuits they were connected with our Church, and toiled in many schemes of debt reduction and Church extension.

Some fourteen years ago the family removed to the pretty village of Trentham, where Mr. Croxton has managed the home-farm for the Duke of Sutherland. Here they were highly respected by all classes. They joined our Handford society, and largely through their enterprise an unwieldy debt has been nearly swept off.

In her Trentham home our sister heartily welcomed and richly entertained all God’s ambassadors. Here, too, she brought up her children in the fear and admonition of the Lord; these all remain loyal to their mother’s Church. For some time her health had been failing, but after all the call came somewhat suddenly. But our sister was ready with her lamp trimmed and burning.

We laid her remains to rest in the quiet little graveyard at Trentham, but her spirit is with God. The number of friends who attended the funeral, and the many sympathetic messages which came to the sorrowing husband and children revealed to us the high esteem in which our departed sister was held. By her removal Trentham has lost one of its most honoured and beloved inhabitants, and Handford Church has lost a most loyal supporter and friend.

Note: The name of Jane’s husband is incorrectly recorded in the obituary.