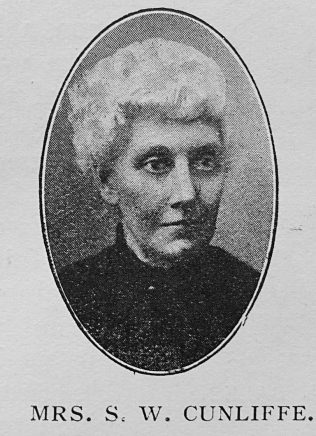 Transcription of obituary published in the Primitive Methodist Magazine by John. E. Leuty

Another serious loss has befallen the old Saul Street Church, Preston First Circuit, by the decease, on April 13th, of Mrs. Cunliffe, the wife of Mr. Richard Cunliffe, who has been circuit steward for many years. This death makes the sixth at Saul Street since July, 1910, of a band of noble women as follows:—Mrs. Farrington, Mrs. Huggon, Mrs. Lang, Mrs. Thompson, Mrs. Taylor, and now Mrs. Cunliffe. All have been, according to means, temperament, and opportunity, faithful workers for the Church; and none more so than the one whose memoir we now write.

Mrs. Cunliffe was born in Jersey, sixty-three years ago, and was brought up in our Church there; her father and mother being members with us for over forty years. Early she imbibed religion. A woman of high spirit, she could not brook wrong doing, and was quick to detect and rebuke it. Mrs. Cunliffe was most companionable and entertaining in society; hence she had many friends. A diligent, honest, conscientious woman was she.

“Richard,” she said to her husband five days before her death “see that the pew rents are paid to-night; I should not like to die in debt.” This was characteristic. Prayerful, devout, regular in attendance at services, and always deeply interested in the welfare of Zion, she has left a distinct gap in our fellowship.

We laid her to rest April 20th, amid a colony of friends, in the Preston Cemetery. A memorial service was conducted by Mr. Leuty on April 23rd in Saul Street Church, the Rev. Alfred King Collet, who was formerly connected with this Church, taking part in the service. The Church grieves sorely at the loss of six women from the Mother’s Class, but God still lives, and we trust Him and say, “Thy will be done.’’

Susan was born abt1847 in the Langport, Somerset, to parents Thomas Tilley Podger, a saddler (1851), and Esther Wallis. She was brought up in Jersey, Channel Islands.

Before her marriage Susan worked as a dressmaker (1871).