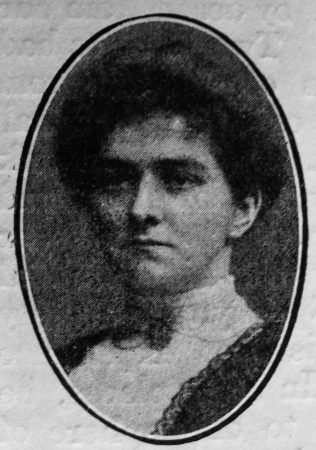 The church at Pollokshaws (Glasgow III.), received a sad shock, and suffered a great loss, in the death, on Dec. 20th, 1907, of Mrs. David Cunningham. Our sister, who was in her thirty-first year, had been connected with the  Pollokshaws Church from girlhood, and had many links of association with it. In November 1904, she was happily united to Mr David Cunningham, who can also claim a lifelong association with the Pollokshaws society. The marriage was a thoroughly happy one; both were united in the love of God, and in zeal for Zion.

Mrs. Cunningham encouraged and assisted her husband in his work in and for the church, and she took such part therein as opportunity afforded. Last year she served as station collector for the Orphanage, and had agreed to act in the same capacity this year. Though living at a considerable distance from the place of worship, she was one of the most regular attenders, and her cheery presence was always an inspiration.

On Sunday, December 15th, she took suddenly ill. The sickness was speedily perceived to be of serious import. A complication of troubles made the prospect of recovery almost hopeless, but in the hope of a surgical operation proving efficacious, she was removed to the Victoria Infirmary on the Tuesday, where, though the utmost was done, she passed away in the early hours of Friday morning.

We deeply mourn her loss, and our hearts sympathies are with the bereaved relatives, but for her we need not weep. For she knew that her Redeemer liveth. As she left home for the Infirmary, she bade her friends remember that “if she never came back to them, her soul was right with God.” In that assurance our hearts rest.

I have not been able to identify Mrs Cunningham in online records. Can anyone point me in the right direction?