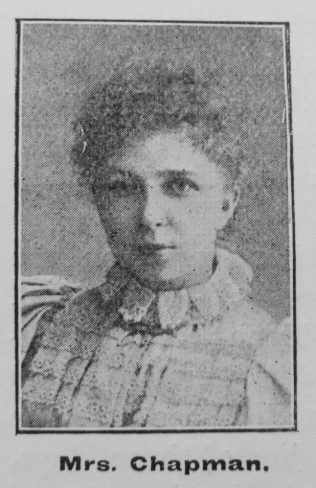 Transcription of Obituary in the Primitive Methodist Magazine by Thomas E. Currah

Mrs. Chapman was born February 1st, 1875, at South Shields and was the only child of Mr. and Mrs. Thomas Elstob. In her parents she had a grand religious heritage: they are among the most devoted workers and respected members in our Glebe Church, Mr. Elstob being at once chapel treasurer, society steward and circuit steward. Their highest earthly hopes were centred in her, – their constant thought was for her happiness and prosperity. And she returned the affection so lavishly bestowed. It was a serenely happy home, full of fine religious influence which never repelled nor became irksome to the child nor the woman. She entered naturally and with a quiet enthusiasm into her parents’ religious work and interest. Her’s was a singularly affectionate and clinging disposition; a rare gentle nature, utterly devoid of selfishness. God made her to live for others and that natural tendency was confirmed by home example and training. In the matter of church work, etc., she was the true child of her parents: she was absorbed in all its interests. No demand made upon her for that great and sacred cause was too troublesome or excessive; to it she gave freely and lovingly of herself and what she had. Her admirable educational attainments were used especially for the good of the young people. Mr. S. S. Robson, her school superintendent and intimate friend, sends me the following reference to her:- “Of her labours amongst us it is impossible to speak too highly, for, as a worker among the young people she was a thorough success. She was loved by all because she loved all. Having been converted at the age of seven, when she had a distinct experience of her acceptance with God, she was naturally a firm believer in early decision for Christ, and in the wonderful religious possibilities of childhood her faith never wavered.” She expressed her supreme aim thus:- “I have deliberately set myself to win my girls for the Master.” It is needless to say she succeeded in a striking manner. She had the faith that made all things possible and the love that “beareth all things, believeth all things, hopeth all things, endureth all things.” For eleven years she taught in the Sunday school, and during six of those years she was the leader of a society class with an average attendance of thirty and upwards. To the writer’s own knowledge this class and its leader were very dear to each other. And no wonder, for her unfailing love had led them to Christ and taught them how best to serve and follow Him.

Her disposition and acquirements, along with her religious experience, fitted her in a high degree for the place of a minister’s wife. On September 10th, 1901, she was married to the Rev. M.H. Chapman, who was also brought up in the Glebe Church and by it sent into the ministry. It is hard to write of these things with the thought of that bright and pleasant scene so near. The happy bride and he who read the words by which she pledged herself to her husband and his ministry, the greatly lamented Rev. R. G. Graham, have both been called from us within the year. Her marriage was the occasion of a remarkable number of tokens of the affectionate esteem in which she was held. She looked forward joyfully and eagerly to the greater and wider opportunities she would now have of serving Christ and Primitive Methodism. How full her heart and mind were of plans, – plans born in her loving zeal for her husband and his work in the Horncastle circuit, all her friends know. It was not to be. Her work seems to be left incomplete; but who are we to judge? It may be that God will pass the precious heritage on to her babe. We pray for that. For only ten short married months was her beautiful spirit allowed to shine out in blessing and helpfulness. To the last, true to her own unselfish nature, she was bright, brave, and ever considerate of others in ways that cannot be written of here. In her last hours she had a crowning mercy in the presence of her mother. Ah, me! those last great solemn hours! She was not crushed by them but obtained the great victory of her life. She was never greater. God strengthened her with His own strength. She fell asleep in Jesus on June 27, 1902. By this she has made death easier and the next life more attractive to her grief-stricken loved ones. On the 28th the body was brought to the old home at South Shields, and on the 30th, the day of the funeral, the writer baptized the little baby girl, four days old, in the presence of the dead mother. She fittingly received her mother’s maiden name – Edith Elstob. The following ministers took part in the funeral service at the Glebe Chapel and at the graveside:- Revs. R. Shields, T. Barnes, W. Duffield, A.T. Guttery, who gave a fine obituary address, H. Pratt, and T. E. Currah.

The large chapel was crowded, and everyone felt the inexpressible mournfulness of the occasion. Memories of the near past rose up quickly and vividly, and now in one fell stroke there lay so many beautiful hopes and plans shattered. But all is not lost; when the tears are dried, then shall the mourners see how many precious things are yet left of them, and perhaps among the most precious is the sweet babe for whose life the mother died. On Sunday evening, July 6th, Mr. W.H. Dunn, a much respected local preacher and intimate friend of the family, gave a very impressive and appropriate appreciation of Mrs. Chapman’s character and work in the Glebe Church – in the church and to the people that were so dear to her. In this time of trouble may God hide His troubled ones in His secret place.

Edith was born to parents Thomas Elstob, a clerk with the North Eastern Railway Company, and Sarah