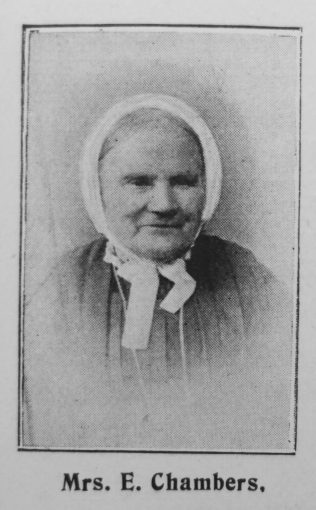 Transcription of Obituary In the Primitive Methodist Magazine by Thomas Whittaker

Mrs. E. Chambers, of Hull Fifth Circuit widow of the late Mr. John Chambers, for many years a prominent official in Hull Primitive Methodism, on January 25th, 1901, passed to her rest and home in the skies. She entered on this mortal life in the city of Norwich, November 6th, 1818. At that time the Connexion was only eight years of age, so that her life has been nearly contemporary with the life of Primitive Methodism. In her seventeenth year she gave herself to the Lord. She was brought to God under the ministry of the late Rev. George Welbourne, a name now almost forgotten, but in his time a most powerful preacher of the Gospel. Mrs. Chambers in her girlhood was a weaver, and was a little proud that at one time she wove the material of which garments worn by the Queen were made. Soon after her conversion she became a Sunday school teacher, a tract distributor, a visitor of the sick and poor. Her new-born love for Christ found practical expression in loving, loyal service for Him. Soon after her marriage to Mr. J. Chambers, the Norwich Quarterly Meeting gave her a note to accompany her husband to his appointments. With some degree of fear and trembling she began her work at Fakenham camp meeting. In 1845, along with her husband she removed to Yarmouth, where they at once fell into line with the officials and workers of the Circuit. While here, her house was for sixteen days the home of the Venerable Hugh Bourne, who was at Yarmouth conducting special services. The memory of that visit was always pleasant and refreshing to her. His table-talk, his prayers, his counsel, were to her a. lifelong benediction. The stay of herself and her husband at Yarmouth was but for two years, but the work they did remained, and for many years they were remembered and recognised as amongst the best workers of our churches. In 1847, Mr. Chambers having obtained work in Hull, they removed thither, and at once joined our West Street Society. Here, her husband and herself began mission work in some of the lowest parts of the city, and were sometimes subjected to considerable annoyance, but they were too heroic to be easily deterred. Mrs. Chambers was a very acceptable local preacher, and won more than ordinary success.

When the writer of this memoir travelled in Louth, she was for seven weeks conducting special services in that circuit, and scores of souls were saved under her ministry. She laboured with marked success in Goole, Driffield, Patrington, North Cave, Scotter, Pocklington, Filey, Grimsby, and Market Rasen circuits. Her success was of the highest order; she was a soul-winner, and many will be the crown of her rejoicing in the day of the Lord. She seldom accepted any remuneration for her services. It was no mercenary spirit that took her away from her home for weeks together to do work of this kind. About 11 years ago she lost her husband and was left to journey alone, but without abating a jot she went on with her work as time and opportunity afforded. The society at St. George’s Row in this city owes very much to her. In the days of its feebleness she nursed it with a mother’s love. At the time of her death she was the leader of two large classes, one at St. George’s Row, and one at Bourne Chapel. She was at her best in the class meeting. Her long and rich experience, her warm heart, her own maturity in grace, gave her special fitness for this work. As a family visitor she had few equals, and she was always welcome to the homes of our people. For many years she was a strong woman. In the early part of the winter she had a serious affliction, and for days she seemed on the very threshold of eternity. Unexpectedly she recovered. It was, however but for a short time. A second attack was too much for her shattered frame, and the end came. Her peace was deep, and full, and abiding. She had no misgivings. Her outlook was without a cloud. She longed to be gone to her rest. On January 29th a funeral service was held in Bourne Chapel. The Revs. T. Sykes, H.O.H. Richardson, J. Pickett, C. Spivey and R. Harrison were present. The address was given by the Rev. Dr. Whittaker, who had known her for nearly fifty years. There was a large attendance. Her remains were taken thence to the Western Cemetery, where they rest in the grave with her husband, near to the grave of William Clowes, and many of the families of the Primitive Methodists of Hull.

Elizabeth was born to parents William, a wool coomber, and Sarah.

She married John Chambers (abt1818-1889), a boot and shoe manufacturer, on 25 December 1839 at St. Peter, Hungate, Norwich, Norfolk. Census returns identify one child.