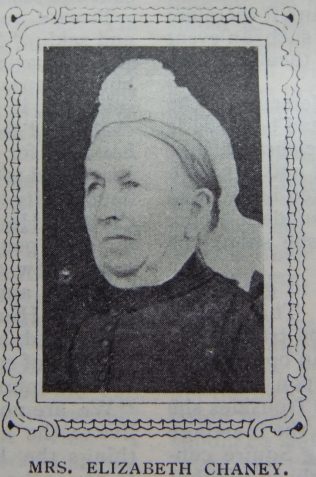 Mrs. Chaney, whose maiden name was Elizabeth Chattan, was born at Newmarket on April 15th, 1821, and is now hale and healthy though in her eighty-eighth year. The family came to reside in Norfolk when Elizabeth was but a child. In 1844 she was married to Mr. Chaney and resided at Carleton Rode, where she opened her house for preaching services on Sundays and week-days. Fifty-one years ago she came to reside at Pulham North Green, now on the Wymondham Circuit.

Through all the years her house has been the ministers’ home, and scores of them have sheltered and slept there. She has been Society Steward over thirty years, and looks after the collections as if they were a sacred charge. She pays the wages of the chapel-keeper, and the charges for lighting and firing out of her own pocket, and it is mainly due to her gifts that the cosy little chapel is out of debt.

For more than half-a-century she has taken the “large Magazine.” The old lady has her “women’s ways,” but she is a good, saintly body, and has long been the mainstay of our village church. How much Primitive Methodism owes to the faithful, devoted, self-sacrificing labours of her obscure members all over the land will never be known in this world. Year in and year out they toil, often without recognition of any kind, and sometimes amid heart-breaking discouragements. They have no place usually on our Connexional Roll of Fame. They figure not in one sense in the high places of the field. And yet are they not there in the Master’s sight? The faithful toiler in an obscure sphere is not forgotten of the great Master. Indeed, there will be many surprises in store for us when the final Judgement arrives. The last shall be first and the first last. Our sister is a worthy member of this band of humble saints, and her record is on high.

Elizabeth married Robert Chaney (1819-1890) in the spring of 1847 in the Depwade Registration District, Norfolk. Robert was a farmer. The 1881 census identifies him as a farmer of 139 acres employing three men and a boy.